September 2019:The Chief Executive’s foreword to the London City Airport’s Draft Masterplan, currently out for consultation, commits the organisation to the following: “We will become a carbon neutral business by 2020 and fully support and welcome the Government’s recent commitments to achieve net zero emissions by 2050. Our ambition is to be at the forefront of this agenda, and we will achieve these 2050 targets by employing the latest technology and innovation and working with our airlines and partners to help the achieve these goals too.”

The Masterplan’s Sustainability Strategy sets out that on ‘Carbon and Climate Change’ the airport’s plans are to:

However, as pointed out by HACAN (Heathrow Association for the Control of Aircraft Noise), London City Airport has admitted that it does not know as yet the impact on climate change emissions of their expansion proposals.

September 2019: Helpful press release from HACAN (Heathrow Association for the Control of Aircraft Noise) stating that London City Airport has admitted that it does not know the impact on climate change emissions of the expansion proposals outlined in its draft Master Plan currently out for consultation. A technical note on ‘carbon and GHG emissions’ sets out that:

“It is not possible at this time to calculate total emissions which might arise from the draft Master Plan because this relies upon the accurate quantification of GHG emissions using detailed modelling and data from a combination of aircraft forecasts, fleet mix composition, construction and engineering designs, energy supply, and other details of the proposed future infrastructure. However, during the Master Plan period up to 2035, it can be expected that further improvements in aircraft fuel efficiency and emissions will take place as greater numbers of ‘new generation’ aircraft such as the Airbus A220-100 are introduced to the fleet. Moreover, the airport is predicted to accommodate an approximate 69% increase in passengers by 2035 (i.e. from 6.5 to 11 million passengers per annum) coupled with only a 36% increase in flights (i.e. from the 111,000 ATMs to 151,000 ATMs) and with only limited additional infrastructure. As such, provisional analysis would suggest that carbon emissions per passenger will decrease even further over the Master Plan period. 2.29 Should a detailed proposal come forward in the future, the airport would need to assess the total GHG emissions of that proposal as part of an Environmental Impact Assessment (EIA)”.

This issue will continue to be scrutinised as London City Airport continues with its planning application.

7 October 2016: Following on from an earlier post about Havering’s Solar Parks initiative – comes further news on the borough’s ambitions, with a press notice that Havering seeks to become London’s first solar powered Council. In addition to plans to build two solar parks, which could have the potential of generating £1m annual income, the councils is exploring the potential for residents to directly invest in a sustainable future for the borough through a solar financial investment fund. Further information on the following Romford Reader article and Havering Council’s website here.

26 October 2015: Plans for the development of the London Riverside Opportunity Area have been progressing for some years now (see post here). Following a consultation earlier this year, final plans were adopted by the Mayor of London on 23 September 2015 as Supplementary Planning Guidance (SPG) to the London Plan and published online and launched at a public event at the NLA on 22 October 2015.

The London Riverside OA covers some 2,500 hectares encompassing parts of Barking and Dagenham and Havering, adjoining the borough boundary with Newham in the west, and forms part of the Thames Gateway growth area.

The planning framework has always discussed proposals for an area wide district heating initiative and the revised set of Opportunity Area Planning Framework (OAPF) documents includes a ‘Decentralised Energy‘ chapter which identifies “opportunities for decentralised energy production and the development of a satellite district-heating networks across the OA that interconnect over time to supply locally produced low to zero carbon energy“.

The chapter also captures the significant amount of work going on in relation to decentralised energy across the region: “Havering Council, with the support of the DECC and the GLA has produced an Energy Masterplan focussing on a Rainham and Beam Park district heat network delivering low carbon heat. It also sets out therole of satellite district-heat networks across theopportunity area that could interconnect over timeto supply locally produced low to zero carbon andwaste energy sources. The Rainham and Beam Park Energy Masterplan should be taken into consideration alongside this framework.”

There are number of planned and existing decentralised energy schemes within the London Riverside area (as shown in graphic above) which the planning document considers as part of the area’s energy strategy, .

March 2014: The London Assembly Environment Committee held the first of two oral evidence sessions on progress made by the GLA’s energy and climate programmes. The first of these sessions was held on 6 February and focussed on the Mayor’s home energy efficiency programme, RE:NEW. Evidence was provided by representatives from a number of organisations, including EDF Energy, the Energy Saving Trust, Hillingdon Borough Council and the Mayor’s Housing Advisor. The full transcript can be accessed here – and a webcast can also be viewed here. Points of interest raised during the debate included:

Just ahead of the evidence session – somewhat belatedly – the Mayor published the full evaluation report of the main RE:NEW roll-out phase which ran from July 2011-May 2012 (a summary report had previously been issued – details here).  A second oral evidence session will take place on 26 March, focusing on the Mayor’s decentralised energy programmes, with the Mayor’s energy advisor, Matthew Pencharz, in attendance.

January 2013: DECC have released their latest quarterly dataset of “Sub-regional statistics show [ing] the number of installations and total installed capacity by technology type at the end the latest quarter that have been confirmed on the Central FIT Register (CFR)”. [DECC weblink;  Excel file] The data provides a useful breakdown of installations under the Feed in Tariff (FIT) programme by ‘local authorities’ and also ‘parliamentary constituency’. The top 10  London boroughs by total installs of PV (photovoltaic) installations under the FITs programme (which started in April 2010) is provided below. 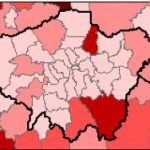 24 October 2012: A recent post provided some regional detail of the uptake of Feed in Tariff (FITs) generators – predominantly photovoltaics (PVs) – across the UK (at the English regions and devolved administrations level). DECC have today released an updated spreadsheet providing a breakdown on the number of installations at local authority and parliamentary constituency level. This highlights that:

In addition to the direct link here the spreadsheet can also be downloaded from the following DECC FITs webpage (the file is called ‘Sub-regional Feed-in Tariffs confirmed on the CFR statistics‘).

Plans for a Future London Riverside heat network set out

January 2012: A draft  London Riverside Opportunity Area Planning Framework (LROAPF) has just been published by the GLA, working with the London boroughs of Newham, Barking and Dagenham and Havering.

The LROAPF area covers over 3,000 hectares of east London, encompassing parts of each of the three boroughs.  The draft states that “Sustainability is an important theme that runs through the document. London Riverside is already part of a wider Green Enterprise District and home to a more concentrated Sustainable Industries District. Energy, waste and water are dealt with in some detail and the way they are inter-connected is brought out.”

The OAPF technical appendices include an energy strategy identifying a number of key opportunities for decentralised energy production in the region. The development of these satellite district-heating networks, which could  interconnect over time, and hence  supply London Riverside with locally produced low to zero carbon and waste energy sources. The OAPF suggests that “In the longer term, the aspiration is to develop a district heating network across London Riverside to supply the heating requirements of existing and future development. (illustrated below)

The concept of an East London heat network follows from work carried out by the London Development Agency (LDA) in relation to the development of the London Thames Gateway Heat Network (LTGHN).

Plans for the decentralised energy network are set out in the main LROAPF consultation draft and also in the Energy Strategy contained in Technical Appendix 5. The closing dates for comments is 10 February 2012.

London schemes through to the next round of ‘energyshare’

12 August 2011: British Gas and River Cottage’s energyshare initiative have today announced the ‘longlist’ of 100 community renewable energy projects bidding for support from the initial £500,000 energyshare fund. Only seven London schemes are in this list of 100 projects and links to their project descriptions can be found below:

Further funding of £2m will be supplied for future bidding rounds by British Gas – much more information on energyshare can be found on their website.