26 October 2015: Plans for the development of the London Riverside Opportunity Area have been progressing for some years now (see post here). Following a consultation earlier this year, final plans were adopted by the Mayor of London on 23 September 2015 as Supplementary Planning Guidance (SPG) to the London Plan and published online and launched at a public event at the NLA on 22 October 2015.

The London Riverside OA covers some 2,500 hectares encompassing parts of Barking and Dagenham and Havering, adjoining the borough boundary with Newham in the west, and forms part of the Thames Gateway growth area.

The planning framework has always discussed proposals for an area wide district heating initiative and the revised set of Opportunity Area Planning Framework (OAPF) documents includes a ‘Decentralised Energy‘ chapter which identifies “opportunities for decentralised energy production and the development of a satellite district-heating networks across the OA that interconnect over time to supply locally produced low to zero carbon energy“.

The chapter also captures the significant amount of work going on in relation to decentralised energy across the region: “Havering Council, with the support of the DECC and the GLA has produced an Energy Masterplan focussing on a Rainham and Beam Park district heat network delivering low carbon heat. It also sets out therole of satellite district-heat networks across theopportunity area that could interconnect over timeto supply locally produced low to zero carbon andwaste energy sources. The Rainham and Beam Park Energy Masterplan should be taken into consideration alongside this framework.” 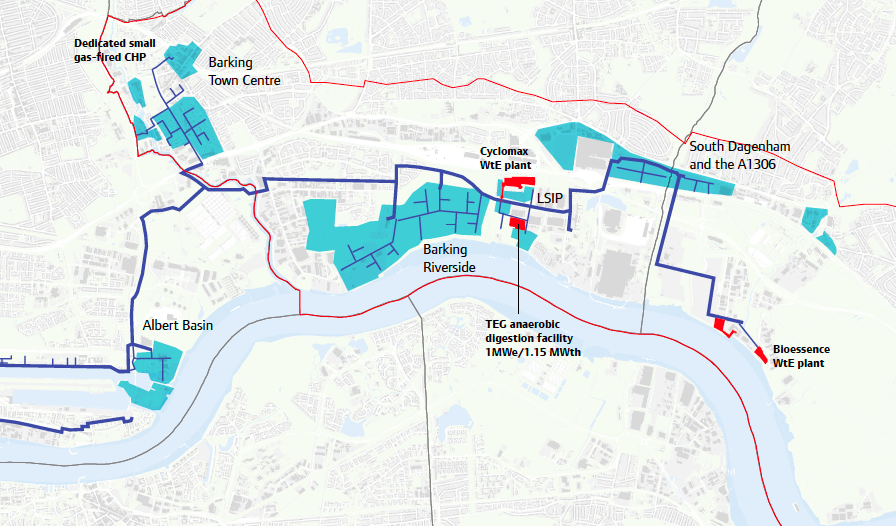 There are number of planned and existing decentralised energy schemes within the London Riverside area (as shown in graphic above) which the planning document considers as part of the area’s energy strategy, .