July 2014: News that Barking Power Station’s owners have begun “negotiations over the facility’s closure due to poor market conditions…The proposal to close the power station and embark on these consultations is taken in the context of the current adverse market conditions for gas-fired power generation,” the facility’s owner Barking Power Ltd  said in a statement on Tuesday. If implemented, the full closure of the station is expected to be completed within two years”.

Despite concerns over falling levels of electricity system supply margins (see latest Ofgem Electricity Capacity Assessment report here), due in part to the closure of coal-fired power stations, the news report states that “because gas prices have been high relative to wholesale electricity, which power generators sell into the grid, aging power stations such as Barking with relatively low efficiency grades struggle to make a profit.” An earlier news report highlighted how part of the plant had been previously mothballed in 2013.

Barking Power Station was completed in 1995 and has a capacity of 1,000 megawatt (MW), enough to supply over half a million homes with electricity. Further information on the power plant can be read in its Wikipedia entry, a profile by the plant’s operator, and – going back a bit further – details of the original coal power station that was opened on the site in 1925!

Barking Power Station was to be lie at the heart of a major Mayoral district heat system in east London – the London Thames Gateway Heat Network. The project was however suspended in 2012.

July 2014: This month the Mayor has been asked questions in relation to:

Mayoral involvement with the Local Government Climate Roadmap; organisations operating at the London Sustainable Industries Park; potential for the London Pension Fund Authority (LPFA) to invest in low carbon London projects; whether Energy Performance Certificate or Green Deal assessments will be provided for homes that go through the RE:NEW programme; monitoring high energy consuming buildings in London; reductions in forecasted projections of CO2 savings in Mayor’s energy supply programme; Transport for London’s (TfL) Energy Strategy; the Mayor’s Memorandum of Understanding (MoU) with energy suppliers; visit by Mayor’s energy advisor to Camden’s biomethane refuelling station; correspondence with DCLG on the Mayor being able to set London specific energy efficiency targets in planning rules for new development; meetings with DECC over encouraging the use of solar PV on GLA land and building; new district heating network using heat from Greenwich Power Station; the low take up of ECO energy efficiency programme in London; connecting Whitehall District Heating Scheme to Pimlico District Heating Undertaking;  the Mayor’s response to a recent London Solar Energy report by Green Party London Assembly member Jenny Jones; future TfL electricity costs; whether the Mayor responded to the Government’s recent solar PV consultation; concerns over government changes to the ECO as raised by the Mayor; funding for the next round of the RE:NEW programme; energy efficiency requirements in the private rented sector; monies received by the Green Bus Fund; work being undertaken to assess the economic impact to London as a result of climate change; attendance at the World Mayors Summit of Climate Change; planning offset funds; contract awarded for management of the RE:NEW programme; and if the Mayor’s High Level Electricity Working Group has considered solar PV.

July 2014: Helpful new map of PV projects installed in London by Solar Century. The London Solar Story highlights that “While many rooftop solar installations go unnoticed by people below, some are more visible. London is home to the world’s largest solar bridge, spanning the River Thames, more than 6,000m² of solar panels on Blackfriars Bridge generate enough solar electricity to meet half the station’s energy needs. This iconic solar landmark can be seen on this solar map. If you are passing by, the solar panels on the Bridge can be spotted from north and south of the river, with excellent views from the Millennium Bridge.”

July 2014: The results of a study of the Mayor’s home energy efficiency programme, RE:NEW, has recently been published in major academic journal Energy Policy (which – for once – is freely available online!) focussing on the first major roll-out of phase of RE:NEW, delivered between July 2011 and April 2012, where 50,683 homes underwent a RE:NEW home energy visit.

The conclusions set out in the paper are quite stark and concludes that with respect to the programme’s engagement with households, that RE:NEW:

The paper’s author researched the delivery of RE:NEW in three inner London boroughs and provides a helpful contribution in understanding the limitations and constraints of the programme. The paper also identifies why the design of the programme may have contributed to the challenges RE:NEW faced in achieving its goals and also in engaging effectively with householders. These include:

Overall, the study concludes: “Negligible savings were achieved as a result of the installation of significant measures. The impact of the visit on energy and water saving behaviours were also negligible. Overall, for these households, the impact of a visit led to an estimated average reduction in annual household emissions of 3%.”

The paper notes that some of the limitations of the RE:NEW programme have been recognised, and were set out in an evaluation report published earlier this year by the GLA (see earlier post here for background and link to paper).

A third phase of the RE:NEW programme has recently been initiated by the GLA.

July 2014: Papers from the University of Leeds ‘Cities, Energy and Climate Change Mitigation‘ conference held on 10th and 11th July 2014 now available online. Nothing specific to London – however – a great presentation from Imperial College’s James Keirstead questioning what actually an ‘urban energy system’ is!
Details of James’ recent book – Urban Energy Systems: An Integrated Approach – can be viewed here.

How climate adaptation in cities creates a resilient place for business

10 July 2014: A new study by the Carbon Disclosure Project (CDP)  reporting on how the “majority of the world’s major cities have disclosed that climate change presents a physical risk to the businesses operating in their cities.”

The press release sets out that CDP has “examined data from 50 cities where 78 companies have reported that they expect climate change to have a physical effect,” and the study illustrates action taken through a number of city case studies, including one looking at how London uses its planning powers. 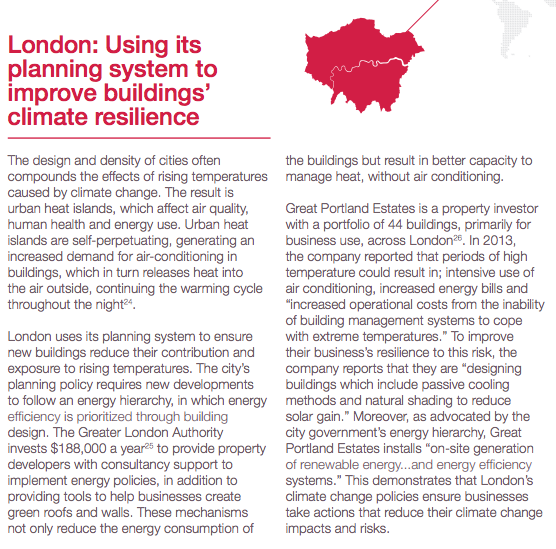 The case study states that the GLA provides “property developers with consultancy support to implement energy policies”. However, what actually happens is that expert consultancy support is brought into the GLA to provide guidance to planning officers to ensure that developers are complying with climate mitigation policies set out in London’s spatial planning strategy – the London Plan. This is fully explained in a reference actually cited in the CDP report – which links to a GLA approval document providing background details for this consultancy spend, which sets out that:

Analysis published at the end of last month by the GLA provides some detailed information on how this consultancy support has helped secure significant levels of low carbon investment in new London developments. Full details here.

Data on climate adaptation measures installed in new London development are less well documented. A recent Mayoral Question (MQ) set out an estimate on the number of green roofs installed in London. A further related MQ touch upon the Mayor’s plan to develop an interactive map on green roofs in London.

July 2014: CHP schemes – depending on size and fuel type – can benefit from a variety of government support mechanisms. These mostly take the form of partial exemptions from the Climate Change Levy, the  Carbon Reduction Commitment (CRC), Carbon Floor Price, EU Emissions Trading Scheme, and business rates. Interaction with these mechanisms can be pretty complex at times  (an  overview of these are provided in the following presentations from an industry workshop last December) but critical to attaining these benefits is for the CHP scheme to achieve a ‘Good Quality’ status under the government’s CHPQA programme.

The CHPQA Standard highlights that the QA system has been place since around April 2001 providing  “a methodology for assessing the quality of CHP Schemes in terms of their energy efficiency and environmental performance. This methodology is based on Threshold Criteria, which must be met or exceeded in order for the whole of the Scheme to qualify as ‘Good Quality’.” The QA programme also requires an annual submission from each CHP plant wishing to be classed as ‘Good Quality’ – and details on how to comply with this QA standard are set out in some comprehensive guidance notes posted on DECC’s CHPQA microsite here.

The CHPQA admits that “achieving CHPQA Certification may at first glance appear daunting” but fortunately, for the majority of schemes going forward in London (ie smaller scale), can access a more streamlined QA process which is available for <2MWe CHP plant (see guidance note 13). Overall, CHP schemes can be seen to go through some of the most rigorous monitoring requirements of all sustainable energy measures to receive government support.

CHP schemes in London that have achieved the CHPQA standard – and which have given consent for their details to be released – are listed on DECC’s Public CHP database here (set ‘region’ criteria to London). Aggregate CHP statistics are published in DECC’s Digest of UK Energy Statistics and regional (including London) data in the September issue of DECC’s Energy Trends journal. Further data can also be accessed on Ofgem’s CCL CHP register here. Additional detail on CHP and district heating schemes can be found on the London Heat Map.