June 2012: The Mayor has recently approved London’s continuing role on the Management Board of C40 Cities Climate initiative. C40 membership comprises 40 global cities and 19 affiliate cities. The direction of the C40 is set by a Steering Committee (SC) comprising of Berlin, Hong Kong, Jakarta, Johannesburg, LosAngeles, London, New York City, Sao Paulo, Seoul and Tokyo. The approval form highlights that “London has been instrumental in developing the C40. London has held the Chair of the C40 and remained at its core as it has continued to develop. It also hosts the Secretariat of the C40.“

The C40 are currently looking to fill a number of posts including a Regional Director for Europe, and a Director for Administration.

June 2012: The Mayor has released information highlighting that he is procuring additional consultancy support from the Energy Saving Trust (EST) for the delivery of his home energy efficiency retrofit schemes, RE:NEW.

The Mayoral approval form states that:

“Between April 2009 and the end of  March 2012 64,000 homes have been retrofitted, 17,543 tonnes CO2 per annum will have been saved and £7.3 million additional funding levered in. The budget for this programme was £7.8 million. Approval has recently been received to continue this work (with £3.3 million allocated in the GLA budget) in 2012-13. This would see RE:NEW delivery continue while funding remains to be levered in. In addition to this, it would start building up a pipeline of Green Deal assessments.

The approval highlights the shortfall in funding to London from the main national energy efficiency programme, the Carbon Emissions Reduction Target (CERT):

“The fundamental barriers to greater retrofitting activity in London are the inherent costs of retrofitting and the number of hard to treat properties in London. This makes it difficult to attract London’s fair-share of activity through the current national delivery model (CERT), let alone the level of activity needed to meet the 60% carbon reduction target by 2025. The latest data, 2009-2011, highlights how little activity London receives compared to other regions (see table below). As London represents 12.8 per cent of the UK population London lost out on an estimated £100 million in energy efficiency funding over the period.”

Seven climate change lessons from the cities of Europe

June 2012: London’s programmes to help reduce the carbon impact of the city are included in a new Carbon Disclosure Project (CDP) and Accenture study. Seven climate change lessons from the cities of Europe examines seven actions that leading European cities are taking to manage climate change in their cities. Further details on an Accenture press release and the following BusinessGreen article. 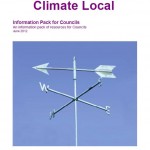 28 June 2012: Waltham Forest, Islington, Camden and Sutton are amongst the first 18 local authorities to sign up to a new ‘Climate Local Commitment’ launched today at the Local Government Association’s (LGA) annual conference.  Climate Local “will see councils committing to their own local actions to reduce carbon emissions and improve their ability to protect people and services from the anticipated changes in the weather.”

Climate Local will build on the Nottingham Declaration, launched in 2000, and the LGA news release states that “As part of the new scheme, local authorities will be sharing ideas and advice on the best ways to save money on their gas and electricity use and ensure there are preparations in place for keeping to a minimum disruption caused by extreme weather like snow, floods and heat waves.”

On the Green Deal, Mr Davey said: “Local authorities and communities, who have the trust and faith of local people, will be essential partners in delivering the Green Deal.
Local authorities are leading work on financing models and joining together to create community interest companies. Six are involved in the Green Deal Finance Company.
Some are taking huge leaps forward – like Birmingham, which is pushing ahead with a £1.5 billion Energy Savers scheme, or Newcastle, which is leading a Green Deal partnership scheme which spans the North East. The GLA is bringing together the London boroughs.“

June 2012: Details around additional funding being directed by the Mayor into the London Sustainable Industries Park (LSIP) has been released. It states that the “delivery of the LSIP will also be a significant milestone for the Mayor’s London Green Fund which has approved investment of £9 million into an Anaerobic Digestion Facility to be delivered on the LSIP.” LSIP – based around Barking and Dagenham –  is being developed on 60 acres of land owned by the GLA  and is at the heart of the Mayor’s Green Enterprise District. Additional information is set out in the London Riverside Opportunity Area Planning Framework.

June 2012: A one-day workshop was held at the Building Centre in London earlier this year – organised by the ‘Heat and City’ initiative –  bringing together leading municipal energy practitioners (including 21 local authorities and a housing association), UK and Scottish Governments, and a range of commercial industry representatives to discuss strategies for financing district heating initiatives.

Amongst the presentations made at the conference – which are now available download – a number were made in relation to projects going ahead in London including:

June 2012: “The Elephant and Castle project is one of the original developments in the C40 Climate Positive Development Program, which was created to meet the pressing dual challenges of rapid urbanization and climate change.” Read more on the C40 blog here.

June 2012: Merton have just published their final report detailing the work undertaken in the Wandle Valley Low Carbon Zone. The zone is an area in a small part of South Mitcham and was one of ten zones across London that were set up as part of the Mayor’s RE:CONNECT programme “to radically reduce CO2 emissions at community level using novel routes to engagement. The aim was to make a 20% cut in Carbon dioxide (CO2) emissions by March 2012 for the whole area.” Download the report here.

June 2012: The results of a project undertaken to help define a zero carbon retrofit strategy for buildings within the suburb of Hackbridge in the London Borough of Sutton has recently been published. The project was undertaken by BioRegional, with funding from the Sainsbury’s Family Charitable Trusts’ Climate Change Collaboration and the three key outputs – the authors say – have been “designed to be replicable in other areas.We hope that you will find them useful for your own projects.”

The area based strategy for zero carbon buildings report seeks to determine:

The Retrofitting District Heating Systems study interestingly found that “district heating (using a variety of heat sources) achieved considerably more carbon emission savings than the full traditional retrofit option (whereby a building’s energy efficiency is improved by improving the building fabric and installing energy efficient or renewable sources of heat and electricity in the building itself) and at a lower cost.” A heat map for Hackbridge has also been produced.

And finally, an Energy retrofit tool for buildings spreadsheet tool which allows users to “input information about the domestic building stock in your area and the tool will then help decide on the best approach to retrofitting it using an area-wide approach.”

June 2012: Ofgem factsheet providing a useful update and breakdown of what makes up an average energy bill.

Information in relation to the ‘supplier margin’ – that is the profit made by energy customers per customer made across different fuel types – is also published on a regular basis by Ofgem in their ‘Electricity and Gas Supply Market Indicators‘ paper. This highlights that Ofgem’s “estimates also show that for the 12 month period from June 2012 up to and including May 2013 the total indicative net margin for a typical, standard tariff dual fuel customer will be approximately £30 per customer.” 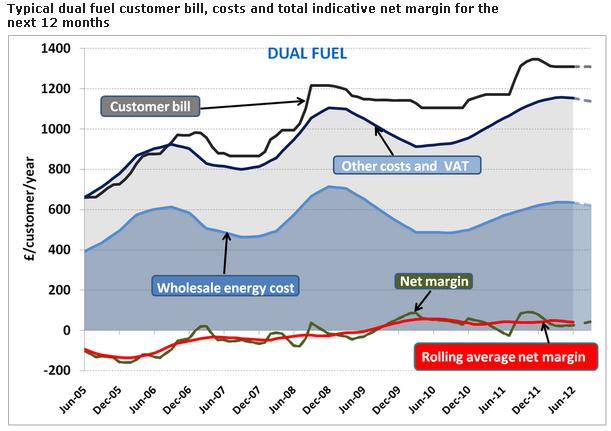 June 2012: Camden have issued a questionnaire to canvas residents opinions about the forthcoming  Green Deal to help decide whether this scheme would work in Camden and if the Council should lead on delivery of the Green Deal in the borough.

June 2012: Camden have issued a draft of new planning guidance to provide advice and information to householders who are considering making energy efficiency improvements to their homes in Dartmouth park Conservation Area.

This guidance aims to “provide residents with clear information about how these improvements can be made to homes without harming the character and appearance of the conservation area.  It explains which measures require planning permission, and then gives guidance on which works are likely to be granted permission.  The measures considered range from small DIY interventions to larger building projects. Some of the measure will change the appearance of buildings in the area.”

The guidance has been produced as part of a pilot project and is a precursor to guidance for all homes in Camden conservation areas. The conservation runs to 15 July 2012 and can be viewed here.