11 December 2020: The Local Government Association (LGA) latest research on the effects of climate change on local authorities shows that eight in ten councils have suffered climate-related incidents in the last five years. The findings emerge from a survey (conducted to October 2020) of Directors of Environment or equivalent of all councils in England which is available here.

Nine London boroughs responded to the survey. The results are aggregated, so no specific London-results are set out. The survey had roughly a 30 per cent response rate, with a majority of councils who had declared a climate emergency responding. Key findings include:

Much more detail set out the survey results.

21 August 2020: “The LGA, which represents councils in England and Wales, has worked closely with the Centre for Public Scrutiny and has published a guide to help councils play a leading role in tackling the climate crisis at a local level. The resource, which sets out 10 scrutiny questions, will help all councils and policymakers to embed the necessary environmental, social and cultural changes that communities need to see to build resilience to respond to climate challenges such as investment strategies and transport plans.”

The guide can be downloaded here and is a useful read setting out comprehensive suggestions on routes to develop a robust climate emergency plan including how future scrutiny of plans can be undertaken; including the local community and how to best engage the public in the plan; planning the involvement of local businesses, partners and employers to understand the local growth context. The 10 questions framing the report are as follows:

17 July 2020: Local Government Association (LGA) news release announcing that the LGA and UK Stakeholders for Sustainable Development have today launched a guide to “help councils engage with the United Nations Sustainable Development Goals (SDGs) at a time when many are starting to re-think the role of local government in leading places and empowering people.” Read the full story and access the guide here.

Three quarters of councils are switching off or dimming streetlights

22 December 2014: “Of Britain’s 5.7 million streetlights 558,000 now being shut off at night, an eight fold increase on 2010, figures show. According to a major survey of the 141 of the 150 councils in charge of lighting Britain’s streets 50 have switched some lights off altogether, 98 councils have decided to dim at least some streetlights. Overall 106 of the 141 councils, doing one or the other, or both figures obtained by Labour Party from FOI requests reveal.”
Read full Daily Telegraph article here.

4 March 2014:Welcome announcement today from DECC that the first tranche of funding to local authorities from the Green Deal Communities Fund includes an unspecified amount to “6 north London boroughs led by Haringey“.

No details have been released as yet in relation to the Mayor’s bid to the fund with 7 London boroughs: Barking and Dagenham, Havering, Greenwich, Kingston, Redbridge, Sutton and Wandsworth (see here and here for more details) – however, this was only submitted to DECC in late December. The Mayor is also supporting a bid “led by LB Camden which will drive take-up of Green Deal within the private rented sector.”

Following the announcement on 2 December 2013, there is now £80 million of capital funding available under the Fund.

Local authorities are taking charge of their energy supply…

February 2014: Useful Guardian online web discussion on how ‘Local authorities are taking charge of their energy supply, so what can we learn from projects so far? Good level of London contributions to the debate, including representatives from Hackney, Haringey and Repowering London. Worth a quick read!

November 2013: A news release from Imperial College highlights a recent study examining the energy consumption of all 198 urban local authorities in the UK, including 33 boroughs in London.  Dr James Keirstead has developed a “new method that draws on three different measures of energy efficiency, currently used by city planners, to create the ranking. The aim was to find the fairest methodology for determining energy efficiency that could give planners an improved way of spotting best practice, leading to more energy efficient and sustainable policies in the future.”

“The London boroughs of Barking and Dagenham and Hackney topped the league table of all UK urban areas analysed in the study…This may be because both are low income areas, equating to lower energy usage. Residents of those areas are also more reliant on public transport and these boroughs lack energy-intensive manufacturing and commerce, which may also be other factors that explain why consumption is lower.”

The news report is a very short summary of a detailed research paper published by Dr Keirstead in technical journal Energy Policy (which unfortunately has a price tag associated with downloading the paper). The table from the paper providing a ranking of UK local authorities by average energy efficiency score is reproduced below: 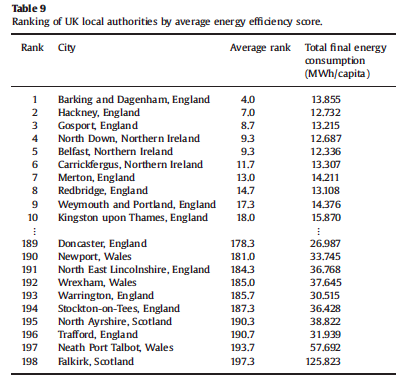 Other London boroughs within the top 10 are Hackney, Merton, Redbridge and Kingston. Oddly, the top two ranked London councils are both within inner London, however, the remaining three in the 10 are all suburban local authorities.

Local authorities in England have now reported to Government on energy efficiency activities in their area in HECA update reports – for more of which, see here.

November 2013: All English local authorities were required to submit an updated Home Energy Conservation study report to DECC by 31 March 2013. An earlier post goes into these requirements in more detail and provides links to the report from those London boroughs who had posted them online on their website.

DECC have now published research summarising around 245 of these reports (see the Excel spreadsheet on the following link) as well as a document providing links to all reports published online. See both here. Only 20 London boroughs reports are however summarised on the spreadsheet. The HECA list states that some London boroughs have still not submitted reports: these appear to be Barking & Dagenham, Brent, Lambeth and Southwark.

It’s unclear if Bexley, Islington and Merton have submitted reports, as no links are listed – though the list does not say explicitly set out that these reports have not been provided: however, their actions are also not summarised on the spreadsheet.

Brixton Energy on the Beeb 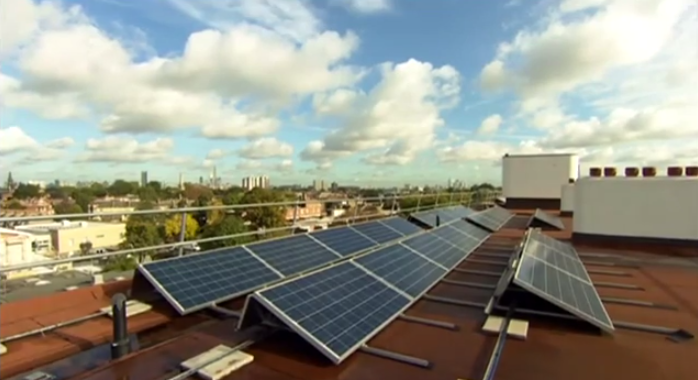 Cllr Peck states in her interview that local authorites should be looking to work on similar projects in their own areas but it will be about the will of councils to say they want to make these projects happen and get rid of the challenges and obstacles.

October 2013: There has been little news recently on progress being made for the first ‘license lite’ license to  be awarded – however – discussions do continue and below some recent references to the initiative are gathered together.

“96. Community renewable electricity projects typically sell their electricity through Power Purchase Agreements (PPAs), whereby an energy supply company agrees to buy electricity from a generator over a fixed period of time at a fixed rate. For community electricity generators it can be difficult to negotiate with large energy supply companies. Aggregators such as Smartest Energy have in the past helped community groups overcome this hurdle. We also recognise that the move from the Renewables Obligation to the Contracts for Difference (CfDs) is a significant one and that the structure of PPAs will need to change, to reflect the changes to the risk profile and the structure of CfDs. The Government has initiated a process to support the market in preparing for the CfD in order to speed this transition and reduce costs.

97. Another route to market for community-generated electricity is Licence Lite, a new form of electricity supply licence, which was proposed by Ofgem in February 2009. The purpose of the licence is to enable smaller scale electricity generators to overcome the costs, risks and complexities of operating in the electricity supply market. If successfully implemented, it will enable them to supply electricity into the retail electricity market and earn a higher market rate than at present for the power they produce.

98. Although no Licence Lite has yet been granted, initial applications have recently been made, including by the Mayor of London, through the Greater London Authority. We hope this will help resolve some of the issues around selling community-generated electricity, and we will be keen to see what evidence comes out of these cases.“

And two recent workshops also provided some information on the background to Licence Lite. At Ofgem’s community energy workshop held in September, Ofgem officials provided a short presentation on the basic benefits of being ‘License Lite’. And law firm Nabarro – who have undertaken significant work in this area for the GLA – held an event in July with a strong focus on licence lite where a helpful presentation was provided by the GLA providing information of their work to date and anticipated further actions. Some previous posts also go into further detail.

October 2013: Really interesting new report by US-based organisation, the  Institute for Local Self-Reliance, describing how “dozens of cities are boosting their local economies while dramatically reducing greenhouse gases“. City Power Play:  8 Practical Local Energy Policies to Boost the Economy provides case studies on various US cities which have used the following routes to help promote energy efficiency and renewables through the following actions:

A lot to learn from this excellent analysis, which can be downloaded here.

The guide provides some helpful references to planning guidance issued by Camden (also see here and here for further information) and Haringey to help support energy efficiency retrofit measures such as solid wall insulation. A further barrier often faced by retrofit programmes has been identifying the most vulnerable homes that would benefit from increased levels of insulation as a priority,  and the report provides some useful information on data-sharing initiatives undertaken by Southwark and Haringey councils, working alongside colleagues in housing and benefits teams, to help overcome this [p 27-30].