Under-reporting of greenhouse gas emissions in US cities

2 February 2021: Paper published in Nature Communications which reports that “Cities dominate greenhouse gas emissions. Many have generated self-reported emission inventories, but their value to emissions mitigation depends on their accuracy, which remains untested. Here, we compare self-reported inventories from 48 US cities to independent estimates from the Vulcan carbon dioxide emissions data product, which is consistent with atmospheric measurements. We found that cities under-report their own greenhouse gas emissions, on average, by 18.3% (range: −145.5% to +63.5%) – a difference which if extrapolated to all U.S. cities, exceeds California’s total emissions by 23.5%.” Access the full paper here. The research has attracted a lot of reporting – Reuters, Bloomberg, Science Daily, New York Times, and Wired.

Over the past decade, focus has (rightly) grown on cities and their contribution to national greenhouse gas emissions and – more importantly – the opportunities that cities have to reduce these emissions. Alongside this there has been increasing work undertaken on measuring urban emissions – most notably by C40 Cities. This new research is a further contribution to this subject and highlights the challenge policy makers and others have in measuring emissions at the local level in the complex environment of a city.

Posted in Library | Tagged Carbon Emissions, Cities | Comments Off on Under-reporting of greenhouse gas emissions in US cities

19 January 2021: A new paper published through the World Economic Forum (WEF) ‘Shaping the Energy Future‘ programme looking at ‘Net Zero Carbon Cities: An Integrated Approach‘. The paper sets out that – as cities move to increasing levels of electrification of heat and transport systems, as well as generating more power locally through decentralised energy systems, an integrated approach across these actions is needed – which needs to involve:

Direct link to the paper here.

January 2021: World Economic Forum (WEF) article “These 5 projects are addressing the climate crisis and inequality in their cities” includes as a brief case study London’s Ultra Low Emission Zone (ULEZ) stating that “The policy has led to 44,000 fewer polluting vehicles in the city every day, and a 44% reduction in roadside nitrogen dioxide (a gas that is harmful to human health) in the first 10 months. Fewer cars also means fewer greenhouse gas emissions contributing to climate change.” More on future plans for the extension of the ULEZ here.

Posted in News | Tagged Cities, Transport | Comments Off on WEF on ULEZ

Rise of Renewable Energy in Cities

October 2020: Report from the International Renewable Energy Agency (IRENA) highlights resource potential, targets, technology options and system-planning priorities for cities around the world. City-level targets – properly attuned to local resources and needs – are an essential component of the transition to renewables.

Helpful overview on range of energy solutions most appropriate for urban areas and highlights the increasing number of cities around the world who have set targets to increase the amount of renewable energy they are using. Chapter 4 a useful run through various modelling tools, the report stating a “comprehensive study was undertaken to evaluate these models and tools, identify prevailing gaps and challenges in the field, and propose recommendations to improve the tools/ methods and their uptake by urban energy planners.” Download the report here.

Full details on following press release and report. Proceedings of the events that took place under the Daring Cities programme can be accessed here.

9 April 2020: Link to an article on phys.org – one of a number which are bringing together some of the parallels between the impacts cities are facing as a result of the coronavirus crisis and likely challenges these urban communities will encounter due to increasing temperatures as a result of global climate change. This piece, by environmental lawyer Amy Turner (also senior fellow at Columbia Law School’s Sabin Center for Climate Change Law) includes some useful links to other thought pieces and research work in this area.

“I hesitate to draw early conclusions about the connection between global emissions, climate impacts and our current pandemic conditions. However, this is a moment of opportunity to marry the best of city climate policy and virus response. While big policy conclusions, connections and questions will continue to be debated, right now there are important observations to be made and potential lessons learned for city policymakers about overlapping approaches from past emissions reduction policies, current COVID-19 policy and future climate policy after the virus has subsided. This post explores some of these intersecting policy areas.”

5 September 2019: The Economist Intelligence Unit (EIU) has published the latest version of their annual city “liveability” index, highlighting their analysis of the best (and worst) cities in the world in live in. It is interesting to note the extent that the impact of climate change is considered, with the report stating that: ” A slew of cities in emerging markets that are among the most exposed to the effects of climate change have seen their scores downgraded. These include New Delhi in India, which suffers from appalling air quality, Cairo in Egypt (where air quality is also a major issue) and Dhaka in Bangladesh. A lack of a concerted global effort to tackle climate change risks further downward revisions in these scores, threatening to offset improvements in the other categories, such as education and infrastructure, which remain on a broadly upward trend.” END_OF_DOCUMENT_TOKEN_TO_BE_REPLACED

Understanding climate change from a global analysis of city analogues

July 2019: “Here, we test the extent to which the iconic cities around the world are likely to shift in response to climate change. By analyzing city pairs for 520 major cities of the world, we test if their climate in 2050 will resemble more closely to their own current climate conditions or to the current conditions of other cities in different bioclimatic regions”.

How are cities planning to respond to climate change?

August 2018: Paper published in Journal of Cleaner Production
Volume 191, 1 August 2018. “This paper reports the state of local planning for climate change by collecting and analysing information about local climate mitigation and adaptation plans across 885 urban areas of the EU-28… Our analysis reveals that city size, national legislation, and international networks can influence the development of local climate plans. We found that size does matter as about 80% of the cities with above 500,000 inhabitants have a comprehensive and stand-alone mitigation and/or an adaptation plan (A1). Cities in four countries with national climate legislation (A2), i.e. Denmark, France, Slovakia and the United Kingdom, are nearly twice as likely to produce local mitigation plans, and five times more likely to produce local adaptation plans, compared to cities in countries without such legislation.” Open access article available here.

CITIES journal on energy and the environment

August 2016: Looking through the 2016 issues of academic journal CITIES, there are a number of interesting papers with an energy/environmental theme posted online which are also Open Access – and hence available to download free of charge. These include: 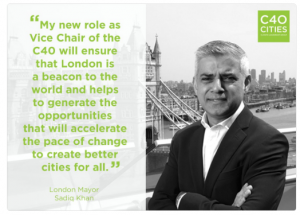 25 July 2016: The Mayor has today been appointed a Vice Chair of C40 Cities, representing the Europe region on the group’s steering committee, alongside Copenhagen. C40’s press release included the following statement from the Mayor:

“… I want London to be at the cutting edge of new green technologies, generating the growth and jobs of the future. My new ambitions for Energy for Londoners, and my new role as Vice Chair of the C40 will ensure that London is a beacon to the world and helps to generate the opportunities that will accelerate the pace of change to create better cities for all.”

The next major convening of the C40 Steering Committee will take place at the C40 Mayors Summit, which will bring together mayors and sustainability leaders from all over the world. It will be held in Mexico City November 30 – December 2, 2016.

Sadiq “…off to a great start”

13 July 2016: Great Carbon Brief interview with Mark Watts, CEO of the C40 Cities group. Prior to his role at C40, Mark was the energy and climate change lead in City Hall during Ken Livingstone’s two terms as Mayor, where ground breaking initiatives such as London’s congestion charge and the 2007 Climate Change Action Plan were introduced.

The exchange covers many key areas across the city and climate agenda, and ends with a short discussion on London – with some positive remarks made by Mark on new Mayor, Sadiq Khan, first weeks in office – but pointing out that “We await with interest him appointing a deputy mayor for environment, which is absolutely needed.”  Though a number of Deputy Mayors have been appointed by Sadiq over the past few weeks (Transport, Culture, Business, Housing etc) – an environment role remains vacant.

“CB: Okay, and much closer to home — what does a London of the future look like to you?

MW: Well, I think London actually starts from quite a good place, because here we already have a very high degree of green space. We’ve got a good level of density. It could it be a bit denser, a bit more like Paris perhaps, but basically the legacy of the Georgians and the Victorian era has been quite helpful for us. I think the thing that probably where London has the greatest opportunity — it actually links back to your question around the investor community — is that London also has the benefit of not merely of being in some sense a model for how a low carbon city works, with this very great public transport system, having a congestion pricing already in place, and all the green space, but also has a large degree of the investor community here, that if we can unlock that capital that’s sitting there ready to be used to build a green economy of the future, then you really will be able to realise the vision of a future low carbon city. And also one, you know, in a context of Brexit, one of the great things about London is its extraordinary cultural diversity, and I suspect that the cultural diversity is going to be a great benefit to delivering a low carbon world, because the cities where people of all different cultures and religions and geographies, have already learned to work together so well, as they have London, are most likely to be the ones that can also cooperate around this extraordinary challenge of avoiding catastrophic climate change.

CB: And do you have high hopes for Sadiq Khan in taking us towards this?

MW: Well, he’s got off to a great start, hasn’t he? I think this huge focus on settling inequality and some really bold moves within the first few weeks. We await with interest him appointing a deputy mayor for environment, which is absolutely needed. They need that senior level leadership and focus as has happened under the previous mayors. But, yeah, I think we expect great things from Mayor Khan.”