December 2014: North London Waste Authority (NLWA) has launched its first phase of public consultation on the North London Heat and Power Project – a £450-500 million Energy Recovery Facility at the Edmonton EcoPark in the London Borough of Enfield. All details are set out on their new website: www.northlondonheatandpower.london.

The development proposal consists of:

North London Waste Authority (NLWA) arranges the disposal of waste collected by the seven London boroughs of Barnet, Camden, Enfield, Hackney, Haringey, Islington and Waltham Forest. The existing Energy from Waste plant at the EcoPark that has served north London for around 45 years and is coming to the end of its operational life.

The following three tenders for the Heat Network have been issued by Enfield in the past few weeks:

June 2014: Congratulations to the Sir George Monoux School in Walthamstow who recently received a prestigious Ashden Award. The school was cited as a “fantastic example of how young people can be inspired in a short space of time to help save the planet. As well as making changes like switching to low-energy lighting and installing efficient boilers, visionary headmaster Paolo Ramella has inspired students of all beliefs and backgrounds to embrace his vision of a carbon-neutral college.” Full details here and here.

And details of what is said to be the UK’s most energy efficient school building have become available following a site visit held in May. Grasvenor Avenue Infant School in Barnet was designed and built by UK Energy Partners, and features high levels of insulation, a heat recovery system, an air source heat pump, LEDs and photovoltaics – further details of which are provided by UKEP here.

An invitation to the UK’s most Energy Efficient School Building

May 2014: Interesting news that the UK’s most energy efficiency school building is in Barnet, and was recently awarded winner in the ‘Non Domestic’ building category at the 2014 GreenBuild awards. Grasvenor Avenue Infant School is based on a modular building Schoolhaus design by UK Energy Partners (UKEP), which – as this ENDS case study sets out – was inspired by the James Review, which recommended standardised design and modern off-site building methods for schools. A standardised off-site construction processes enables big cuts in embodied carbon emissions in the production and supply chain and delivers a combined energy use and cost savings of 80% compared with traditional school buildings with a passive index-linked revenue from the integrated solar PV roof. 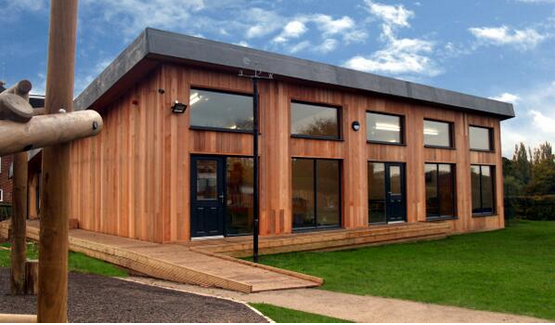 UKEP are organising a tour of the building on 29 and 30 May. Full details on how to register for a tour on UKEP’s website here.

January 2013: DECC have released their latest quarterly dataset of “Sub-regional statistics show [ing] the number of installations and total installed capacity by technology type at the end the latest quarter that have been confirmed on the Central FIT Register (CFR)”. [DECC weblink;  Excel file] The data provides a useful breakdown of installations under the Feed in Tariff (FIT) programme by ‘local authorities’ and also ‘parliamentary constituency’. The top 10  London boroughs by total installs of PV (photovoltaic) installations under the FITs programme (which started in April 2010) is provided below.

January 2013: Responding to a competition launched last October, DECC have just announced that 132 projects have won a share of £46 million of funding. The three strands of the funds were  “to help reduce fuel poverty, boost energy efficiency, and encourage collective switching and purchasing in regions across Great Britain.” The full press release is here and boroughs successful (and amounts awarded) can be downloaded here, and shows London did well with a total of £11m worth of projects selected. These were:

Little information is available at the moment on what exactly these various schemes will do in their respective areas, however, some  guidance released when the competition was launched provides details of what this funding is supposed to be delivering.

London Councils reports that the last of the collective energy purchasing schemes, where Kingston Council is the lead borough, will help “Vulnerable residents in up to 1.75 million homes across London will be offered assistance by their local council to get a better energy deal and save money.” DECC’s Secretary of State, Ed Davey, is hugely supportive of such collective purchasing deals (see here and here), and promoted such programmes in his former role at the Department of Business (BIS). He’s also the MP for Kingston and Surbiton, so it’s not surprising that his local council undertook a strong role in this competition.

3 December 2012: Energise Barnet CIC, a social enterprise, has submitted a plan to Barnet Council to create £200 million of social, economic and environmental benefit through the installation of energy saving measures and renewables in 40,000 homes and buildings. Further details are on the following Energise Barnet press release.

Energise Barnet were awarded funding last year from Barnet’s Big Society Innovation Bank to help develop the proposal, and were also selected as a Pitch Pledge initiative (for which, see further information here and here).

Barnet highlighted earlier this year (see Q37) that it had “fully participated in both the Mayoral Group for London Councils and the Future of London research project on the Green Deal. It has used this involvement to enable an internal scoping process to take place on how it can best engage with the forthcoming national Green Deal agenda. From May 2012 the Council will begin work on preparing an Outline Business Case to explore and consider the way in which the Council might support the market to promote uptake ofthe Green Deal amongst local residents.”

September 2012: Key to the proposed North London Waste Plan (NWLP) – currently under development – is the development of a new ‘Mechnical and Biological Treatment’ (MBT) plant at the former Friern Barnet Sewage Works at Pinkham Way. An independent planning inspector has however recently ruled that the Plan has not been properly consulted on with neighbouring boroughs and hence developers (see below) for the project  must look again at resubmitting their proposals.

The NWLP sets out the planning framework to 2027 for waste management in the seven North London boroughs – Haringey, Barnet, Camden, Enfield, Hackney, Islington and Waltham Forest – which together are known as the North London Waste Authority (NWLA) . It identifies sites for waste management use and sets out policies for determining waste planning applications.The Plan has been under development now for several years, and the inspector’s decision will now knock the timetable for the adoption of the councils’ proposals.

The planning application for the Pinkham Way is a separate process to the overall plan and is currently on hold. The ‘mythbusters’ section of the NWLA website sets out that the MBT to be based there will be used to “manufacture a solid fuel from waste that is left over after as much recyclable material as possible has been extracted; that fuel will then be transported to one of two sites outside of north London where there is a need for energy (heat and electricity).” This type of fuel is usually called SRF or solid recovered fuel.

The website goes on to say that “NO waste incineration will take place on the site, and no plans are being made to accommodate incineration at Pinkham Way now or in the future.”

NWLA also state that “The carbon impacts of waste are mostly in the treatment of the waste rather than in its transportation, but even so we are seeking to have the Solid Recovered Fuel (SRF) delivered to the fuel-user by rail or water transport to minimise this. It is also important to note that we are making SRF precisely so that the maximum carbon benefits of combined heat and power can be reaped at a location where a suitable demand exists. The alternative would be to build a new incinerator that recovers only electricity and that wastes the heat; and this is very specifically what we are not proposing to do.”

A lot more information on the NWLA’s proposals – and the active campaign directed against them – is provided at the pinkhamwayincinerator.blogspot.co.uk website.

13 February 2012: A recent Parliamentary Question by Hendon MP Matthew Offord asking for DECC’s latest estimate on the number of fuel poor households in his constituency and more widely.

Mr Offord: To ask the Secretary of State for Energy and Climate Change how many households in (a) Hendon constituency,(b) London and (c) the UK are in fuel poverty. [93222]

Gregory Barker: In 2009, the most recent year for which data are available, the number of households in fuel poverty for these areas was as follows:

Estimates made by Government of fuel poverty at the regional and local authority area were last published by DECC in 2011 using 2009 data (download spreadsheet here) hence the answer to the above question.  DECC’s latest issue of Energy Trends also issued an article on this data. More recent non-governmental estimates have been made (however not at the local authority level) and can be seen here.

January 2012: DECC’s Bio-energy Capital Grants Scheme supported “biomass-fuelled heat, and combined heat and power projects in the industrial, commercial and community sectors in England.” A spreadsheet has just been released providing details of projects supported by rounds 1, 3, 4, 5 and 6 of the scheme.  Projects are not listed with any specific geographic information however from a quick review it appears that only 4 of the 215 schemes supported appear to be in London, which are:

Nigel Farren of Energise Barnet has also been selected as the only London representative on a newly formed ‘Community Energy Contact Group’ convened by Energy Minister Greg Barker. The first meeting of the Group took place in December with Nigel joining  eight other community groups and organisations from across the UK who will help DECC understand the issues and opportunities facing communities setting up local renewable energy initiatives. Further details on Energise Barnet’s involvement in the Group can be read on the following news report.

DECC have stated they welcome feedback and suggestions on community energy initiatives as well as notable case studies  which should be sent to alison.bailey@decc.gsi.gov.uk. DECC are also seeking guidance from community groups via a short survey posted on their Community Energy Online website.

October 2011: Three bids have been submitted to the North London Waste Authority (NLWA) to generate energy from the 300,000 tonnes of solid recovered fuel (SRF)  created from the 500,000 to 600,000 tonnes of North London’s waste that cannot be recycled  or composted.
The NWLA is a statutory waste authority managing the disposal of municipal waste from seven London local authorities (Barnet, Camden, Enfield, Islington, Hackney, Haringey and Waltham Forest) and this procurement is one of two that NLWA is running to provide a “long term and sustainable waste management solution for North London”.  A separate procurement is being run that will involve recycling or composting half of North London’s waste, producing the fuel and minimising the landfilling of municipal waste.
The contract for the use of SRF will be available from 2015 for up to 25 years and the NLWA states that it “is striving to achieve the most efficient form of energy recovery. This could be with the fuel being used in a Combined Heat and Power (‘CHP’) plant, located close to where the energy demand is.”
The NWLA have provided updated details of the three bids, all of which utilise CHP technology  on the following news release.

The winning proposal will be selected from one of the three shortlisted candidates during the next 12 months using an evaluation framework that focuses on the quality and cost of the solution.
Further information on how SRF is produced is set out by the NWLA here.