Numbers of fuel poor in London to rise by 50% 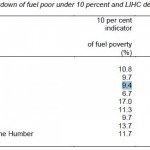 September 2012: DECC have issued a consultation proposing the adoption of a new definition for fuel poverty. This follows an extensive review by Professor John Hills of LSE, initiated by the Government in 2010, who reported to Government earlier this year, … Continue reading →

27 September 2012: DECC’s latest issue of Energy Trends follows up from national Combined Heat and Power (CHP) dataset, published  in July’s Digest of UK Energy Statistics (Chapter 7) (see also CHPA’s press release for further information on this), to present the data in a regional format, providing some detail on the use of CHP in London. The article – Combined Heat and Power in Scotland, Wales, Northern Ireland and the regions of England in 2011 – can be downloaded here.

A number of things can be observed.

Table 1 highlights that there are 212 CHP schemes in London currently registered with the Government’s CHP Quality Assurance programme (more details at www.chpqa.com). This means that these generation plant have provided details of their operation to the QA programme and qualify for the benefits of being classed as ‘good quality’ such as exemption from the Climate Change Levy. A full list of where these 212 schemes are not unfortunately in the public domain, however, DECC do keep a subset of these schemes (32 listed at the time of writing) on their CHP database (run the region report for London). Additional schemes should also be able to be identified on the London Heat Map. Note – there are likely to be more than 212 schemes – small scale (say around 100kWe and below) CHP engines may not bother registering with the CHPQA as the financial benefits of the CCL exemption may only be modest for such plant. 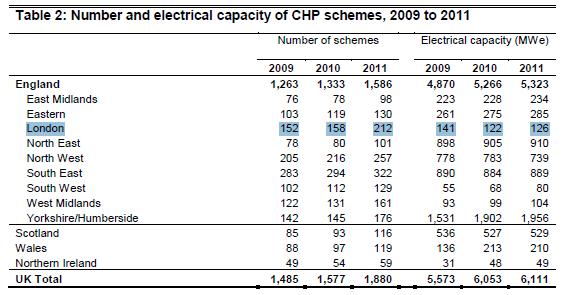 Table 2 however appears to show that, since 2009, there has been a net growth of 50 CHP schemes in London (ie some CHP plant may have been decommissioned – the actual number of new plant isn’t provided – only the net figure of 50). There has been a considerable revision of the numbers since last year’s dataset (for which, see story here) which reported that 188 Good Quality CHP schemes were operational in  London as at the end of 2010, as compared with the 158 seen in the table above. Overall a confusing picture!

More importantly, there appears to have been a massive downward revision in the overall CHP capacity operating in London:

September 2012: The Renewables Roadshow will be at Wembley Stadium on 3 October 2012 and features a large number of energy efficiency and renewable energy company products and exhibitors. Apply for free tickets at renewables-roadshow.co.uk. The showguide can be downloaded here [16MB document].

Energy and Climate questions to the Mayor

September 2012: This month the Mayor has been asked questions in relation to:an update on the evaluation of Mayor’s domestic energy efficiency programme RE:NEW;  the source of the new cable car energy supply;  the promotion of sustainable biofuels in London and the impact of biofuels as a result of the Government’s proposed changes to the Renewable Transport Fuel Obligation including those schemes using recycled catering oil;  the Government’s proposed changes to the support for Anaerobic Digestion in the Renewables Obligation and it’s consequent impact on delivering such schemes, including those supported by the London Waste and Recycling Board (LWaRB);  the number of companies which have signed up to the Mayor’s Green 500 programme; the number of ‘green jobs’ secured under the Mayor’s RE:NEW and RE:FIT programmes; the growth in low carbon goods and services in London; whether the GLA Group procurement strategy has helped create good environmental management and practices; an update on the ‘Prospectus for London the Low Carbon Capital’ study; details of EU JESSICA funding to London; potential skills shortages as we move to a low carbon economy in London; an update on the Mayor’s Retrofit Academy programme; building ‘carbon thinking’ amongst London’s businesses; promoting low carbon requirements in major developments; an update on LWaRB anaerobic digestion plants supported in London; Pinkham Way waste processing plant; problems association with AD projects failing; changes to support the uptake of AD; the number of buildings treated under the Mayor’s RE:FIT programme; 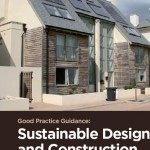 This guidance has been produced for use by local planning authorities in England, together with landowners, developers, businesses, town and parish councils, community groups and others. Download the guidance document here.

September 2012: Camden have published new guidance for home owners in Dartmouth Park who want to make changes to improve the efficiency of their homes.  Camden says that the “guidance shows that historic homes of the types found in Camden’s conservation areas can be made more energy efficient, often through relatively minor and easy changes, and still retain their special character and appearance. Where major energy efficiency measures are required, the guidance sets out how and where these are likely to be acceptable”.

Dartmouth Park Conservation Area is largely typified by houses with solid brick external walls, without a cavity. In terms of the forthcoming Green Deal and ECO, both of which strongly support the greater use of solid wall insulation (SWI) the guidance sets out that ‘External Wall Insulation’ (EWI) proposals will need planning permission, but approval is not needed for Internal Wall Insulation (IWI). For EWI the guidance goes on to say[p16] that:

A comprehensive street-by-street breakdown of what will be acceptable in terms of energy efficiency improvements is then provided (!) and pages 33-36 provide further guidance on specific aspects of EWI.

Who supplies electricity to Londoners?

11 September 2012: A recent parliamentary question highlights the extent the Londoners continue to use the local energy supply company EDF Energy (who took over London Electricity fully in 2006) as their electricity supplier. The response reports on data from August 2010 and  indicates that EDF Energy has a market share of 74% of London’s electricity market. In terms of dual fuel contracts, British Gas holds the largest market share in London across the ‘big six’ at 40%.

September 2012: Recent parliamentary question in the House of Commons provides a useful summary on where London housing statistics are kept and collated.

Statistics on new housing starts and completions in each local authority in London, taken from the National Statistics on House Building, are published in live table 253 on the Department for Communities and Local Government’s website which is available on the following link.

These statistics show starts and completions split by tenure according to whether the organisation responsible for the development is a private company, a housing association or a local authority. The figures for housing associations and local authorities can together be used as a proxy for affordable housing starts and completions. However, these figures may underestimate affordable housing supply and overestimate private housing, as they are from building control records in which the ultimate tenure may be difficult to identify.

Statistics on the full extent of affordable housing supply by local authority are published in the Department’s live tables 1006, 1007 and 1008, which are available at the following link.

From 1 April 2012, the Mayor of London has had oversight of strategic housing, regeneration and economic development in London.

September 2012: SuperHomes are open once again to the public to visit in  on the weekend of 22 and 23 September 2012 . SuperHomes are older properties renovated by their owners to reduce carbon emissions by at least 60%. These include Georgian, Victorian, Edwardian and more modern properties. As the Superhomes website says “Attending an open day is a great way to get a relaxed touch and feel experience of what it means to live with green technologies in a dramatically improved older home like this.  It is also a chance to speak to a homeowner with first hand experience of both the benefits and challenges of a major refurbishment project.”

September 2012: The Energy Saving Trust (EST) are launching a new package of support to prepare SMEs based in London for the upcoming Green Deal and Energy Company Obligation (ECO).

The first part of the three stage workshops  – ‘Green Deal readiness and certification’- is a morning session and the three date options are set out below:

The workshop will cover:

Full details of all three stage workshops are detailed here.