The report indicates that London has – once again – been poorly served by the programme, with the capital having the lowest number of homes assisted. See graphic from the report below. 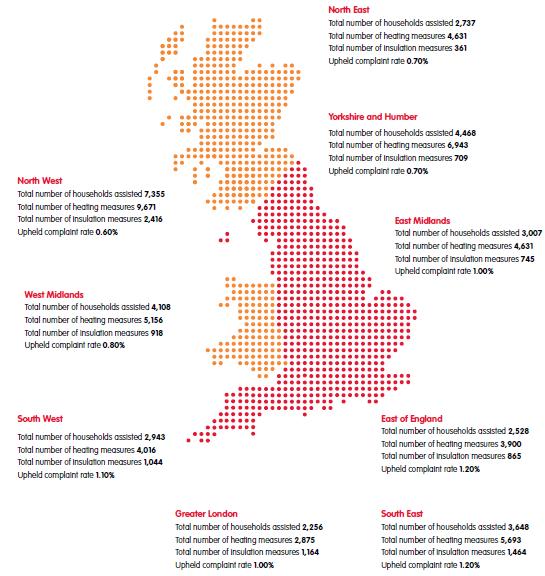 Warm Front was the Government’s principal fuel poverty alleviation scheme and the only energy efficiency scheme centrally funded by Government [ie the various energy supplier obligation programmes that have operated over the past decade (EEC, CERT, CESP) are paid through by charges added to UK householders electricity and gas bills by energy companies]. The incoming Government decided to significantly reduce the budget of Warm Front – from  an annual spend of £345m to £110m in 2011/2012. This was further reduced to £100m in 2012/13 which was also decided to be the last year of the scheme.

The foreword to the annual report points out that “For the first time in the history of the scheme the budget available was not fully spent. The greatest reason for the budget not being fully spent was undoubtedly the low rate of applications received by the scheme.” The Government came under significant criticism in 2012 as a result of this underspend, coming as it did at not only at a time of increasing fuel price rises, but also after the budget of the programme had been cut by 68%! A House of Commons briefing note from February 2012 provides details to all of this – and further info on the impacts in London in post here).

In relation to the final year of the programme – 2012/13 – the annual report for which we may not see for another year (!?) – the Government actually withdrew funds late last year from the Warm Front budget to pay for a number of new initiatives  – the Green Deal Pioneer Places programme, a fuel poverty programme and a collective switching scheme (details via the following link). It was not announced at the time that some £30m was drawn out of the Warm Front budget to fund these schemes  –  and only came to light earlier this year (see latter parliamentary questions from Shadow Secretary of State Caroline Flint to DECC here).

January 2013: Tim Starley Grainger has posted some useful graphics on how London is faring under some key Government energy efficiency and renewable energy programmes, such as CERT, Warm Front and progress under the Feed in Tariffs (FITs). As highlighted in various posts on this site, it doesn’t make for cheerful viewing. Graphics posted here.

October 2012: Just posted on the GLA website is a Mayoral approval form for the current round of RE:NEW 2012/13 (also called RE:NEW II). The approval form is signed and dated by the Mayor back in April (pre-election) but has only been posted on the GLA website on 16 October. It provides for £3m to be allocated to retrofit a further 24,000 homes (on top of the 64,000 homes treated under RE:NEW I) by the end of this calendar year. An additional £300,000 is being spent on stimulating early Green Deal uptake with  a delivery agent procured (using the RE:NEW framework) to deliver RE:NEW Green Deal to residents in selected areas.

The approval form sets out that “The focus of the RE:NEW Green Deal delivery would be to generate early leads for Green Deal assessments once it becomes available, test different methods for generating this take up (including the creation of local champions and referral fees) and other engagement and education tools.”

“It is expected that through this work stream, 3,500 homes would have signed up for a Green Deal visit by March 2013. As part of the wider engagement, there would also be an element of education and promotion of Green Deal across London as a whole. This would enable any Londoner to sign up to receive a Green Deal survey as soon as available.”

Further information on RE:NEW targets is available in the following post.

October 2012: This month the Mayor has been asked questions in relation to:

a London-specific target under the Government’s forthcoming Energy Company Obligation (ECO) programme; progressing in achieving the Mayor’s Hydrogen Powered Vehicles strategy; the provision of energy efficiency support to SMEs in London; work being undertaken under the Mayor’s Decentralised Energy Project Delivery Unit; support for Cooperative Renewable Energy projects; how London will benefit under Energy Company Obligation (ECO); a list of all current Decentralised Energy projects supported; the roll out of the Green Deal in London; work to support the support the non-domestic Green Deal programme in London; the scale of the Mayor’s Green Deal programme in London; Guidance on low carbon cooling systems; low/zero carbon measures secured through the GLA’s planning process;  GLA review of the potential for low and zero carbon microgeneration technologies; future carbon emissions related to new infrastructure projects; work by the GLA with ICLEI, C40 and Eurocities on climate mitigation and adapation; and update on Low Carbon Skills Forum; planned budgets for future carbon mitigation programmes; carbon savings achieved by the Mayor’s programmes; the success of the Feed in Tariff (FIT) programme in London; an update on the London Thames Gateway Heat Network; the publication date of the Mayor’s Technical Guide for District Heating; and progress on the development of district heating commercial templates and a London Heat Charter. Planning guidance on sustainable design and construction; progress under the RE:FIT programme; targets under the RE:NEW 2 programme; annual progress report on the Mayor’s climate programme; an update on the London greenhouse gas inventory (LEGGI). Publication of the London Environment Strategy (see here for the answer referred to); the number of Solid Wall Insulation companies in London; Mayoral action on tackling Fuel Poverty; energy efficiency of new homes in the Olympic park; proposal for a zero carbon development around the Olympic site; energy consumption of superfast broadband; and future plans for Edmonton incinerator.

A series of questions (below) were asked in relation to RE:NEW – all of which were directed to a question asked earlier this year pointing to the November 2012 publication of the evaluation of the RE:NEW programme.

Reductions to Warm Front Grants in West Ham and Newham

10 Feb 2012: London has historically fared poorly under the Government’s Warm Front programme, as has been detailed in earlier posts here. There’s been some criticism of Warm Front in recent weeks (see here and here) that, despite Government cuts made  in 2011, there has been a significant underspend to the programme this year.

NEA have reported that London has seen a 67 per cent reduction in applications over the period March – December 2011 when compared with the same period in the previous year (a similar reduction has been seen in other regions).

West Ham MP Lyn Brown has recently asked DECC a Parliamentary Question about the level of Warm Front grants provided in her constituency and in the wider Newham area. The full answer can be seen here (scroll to column 274).

Provisional figures for 2011/12 are only available at the moment but they serve to  illustrate the level of reduction:

December 2011: This month the Mayor answered London Assembly questions in relation to LFEPA CRC efficiency as compared to other parts of the GLA group; the number of Excess Winter Deaths due to fuel poverty in London; steps taken by the Mayor to promote Combined Heat and Power; clarification on the RE-FIT programme; contribution from the Mayor’s Budget to the Centre of Low Carbon Technology; the numb of Flats treated under home energy efficiency programme RE:NEW; the Cost of delivering RE:NEW and CO2 savings abatement cost; the number of homes treated in the private rented sector; the Mayor’s activities in promoting subsidised insulation programmes across all of London; the RE:NEW delivery of CESP; the number of Benefit Entitlement Checks undertaken under RE:NEW; Subsequent benefits of RE:NEW home energy efficiency programme; RE:NEW’s  treatment of homes in fuel poverty; the Energy Companies’ Record of delivering energy efficiency in London; an update on Borough roll-out of RE:NEW; an update on RE:NEW; the extent of London’s energy Gap; the degree of Carbon Emissions Reduction Target (CERT) delivery in London; an update on LEGGI greenhouse gas emissions data; delivery of the RE:NEW Home Insulation scheme in Islington; projections for the capacity of  PV in London by 2025; targets under the RE:NEW programme; London Underground’s use of Renewable energy and again; energy reduction in GLA buildings and targets; and increasing the number of  lighting controls at London Underground stations.

15 September 2011: The Government’s Warm Front scheme offers a package of heating and insulation measures of up to £3,500 for people on  income-related benefits. To be eligible you must own your home or rent it from a private landlord. The latest annual report for Warm Front was published yesterday and,  as with last year, London came bottom regionally (England only) in terms of support delivered by the programme in all but one measure. Specifically:

The one area where the programme delivered better in London than elsewhere was with respect to Benefit Entitlement Checks (BEC) where the average weekly increase in benefits achieved was £37.27,  a good 20 per cent more than the next highest region. This would provide a total increase in unclaimed benefits to those London households of £1,938 a year.

As part of the outcome of the ‘Spending Review 2010’ Government reduced funding to Warm Front to provide a smaller more ‘targeted’ scheme for the next two years (with no information as to whether the programme will continue past 2012). With the relative success of Warm Front in London on BECs, it is disappointing to note that the Annual Report states that this new streamlined Warm Front programme “will no longer provide benefit entitlement checks. Given the reduction in the budget for the scheme, the decision was taken to focus on measures that can deliver immediate heat and warmth into customers’ homes, as well as potentially lowering their energy bills. Customers will still be signposted to other services and stakeholders that provide access to benefits advice, such as Citizens Advice.”

14 April 2011: The Government’s insulation and heating improvement fund, the Warm Front Scheme, has begun taking new applications – revised eligibility criteria and the scope of the scheme is available on the following government news release.

15 January 2011: DECC’s publication of the Warm Front Annual Report for 2009-10 highlights the low level of delivery – the lowest in the country – of the programme’s insulation and heating improvement grants to London. For further information download the DECC report here.