Numbers of fuel poor in London to rise by 50%

September 2012: DECC have issued a consultation proposing the adoption of a new definition for fuel poverty. This follows an extensive review by Professor John Hills of LSE, initiated by the Government in 2010, who reported to Government earlier this year, concluding that  “The current official way of measuring it [fuel poverty], based on whether a household would need to spend more than 10 per cent of its income on energy, is flawed, giving a misleading impression of trends, excluding some affected by the problem at some times and including people with high incomes at others.” (from Hills Review press release).

The Government’s new consultation announces that it proposes to take on Prof Hill’s recommendations and- of key importance to London – is that costs of energy to a household must now be calculated after housing costs are taken into consideration – a change from the current definition – which leads to a significant change to the numbers of fuel poor in the capital.

Para 87 of the DECC consultation highlights that  “In his report, Professor Hills proposed using income after housing costs have been deducted. He argued that this would better reflect the true disposable income of households – on the basis that income spent on housing costs does not represent truly discretionary expenditure” – as a result the consultation states: “Government intention: The methodology used to produce the fuel poverty statistics will be calculated on the basis of income after housing costs have been deducted.” [p34] 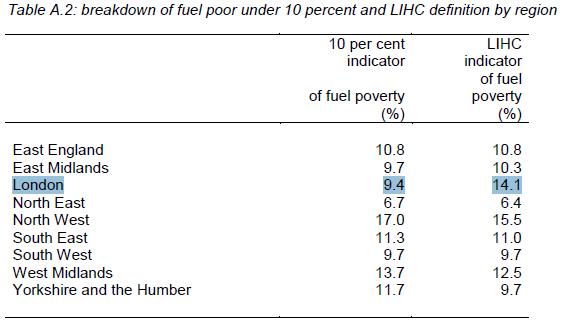 DECC’s consultation runs to November 30 and the press release states that DECC will publish its decisions early next year, alongside an updated  fuel poverty strategy.

For further London issues related to fuel poverty, see the ouput from the London Assembly’s recent investigation into the issue as well as previous stories posted here.

This entry was posted in News and tagged DECC, Fuel Poverty. Bookmark the permalink.