23 February 2016: The GLA launched the first outputs from their forthcoming London Energy Plan (LEP) at an event held at the The Crystal. The purpose of the LEP is to support the development of the London Infrastructure Plan by evaluating  London’s future energy needs to 2050, as a result of a rapidly increasing population (approximately 100,000 people a year) and the predicted increase in energy demand as a result of this growth. Further background to the London Energy Plan can be seen on the following presentations here and here.

As part of this work, the GLA have built on previous work in establishing a London Heat Map, to develop the first spatial mapping of London’s energy demand, supply and infrastructure. The interactive map allows different scenarios for energy supply and demand across London in 2015, 2025 and 2050 to be explored (in that, it is similar to DECC’s 2050 Energy Calculator). The London Energy Plan map can be accessed here. 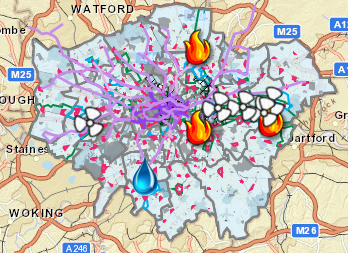 An accompanying Scenarios to 2050 narrative document (direct download here) provides the detail and context to the assumptions made across these scenarios. Two key messages that came out of the event was that for London to achieve its longer term energy and carbon goals, there was an urgent need to start planning and to act now. Additionally, the highest amount of effort in terms of energy and emissions reductions needed to be achieved over the next decade – something that an incoming Mayor in May 2016 will need to address.

The GLA’s modelling work has been supported by the following studies commissioned by the Mayor:

Presentations delivered by the GLA at the event (not available as yet) provided details around some of the initial results of this modelling work, which included:

No timeline was given as to when the final London Energy Plan will be published, or whether the findings from this work were to be consulted upon. The GLA did however state that the LEP Advisory Group set in place to help support the development of the spatial map will remain in place for the time being.

This entry was posted in Decentralised Energy, News, Renewable Energy. Bookmark the permalink.