November 2013: At the BRE’s recent event Developing heat networks in the UK three presentations were delivered on developments in London – links to which follow below:

August 2013: COSPP article giving a little more background to the SELCHP heat offtake scheme in Southwark (more of which here).

“Councillor Barrie Hargrove, cabinet member for transport, environment, and recycling said: “As the first London borough to take such a positive step, we are signalling our strong commitment to the reduction of carbon emissions and keeping Southwark an environmentally friendly zone.”

The Financial Times have also covered the project with their own singular headline ‘French rubbish scheme hots up to cut London energy bills‘.

April 2013: Southwark has recently agreed and signed a ‘Head of Terms’ agreement on a heat services contract with Veolia for “the provision of low carbon heat from the South East London Combined Heat and Power (SELCHP)”. As set out in a 2012 press release from the council, the project is to to create a district energy network which will transport heat – that is currently wasted – from Veolia’s  South East London Combined Heat and Power (SELCHP) Energy from Waste plant in Lewisham, to serve six housing estate in Southwark. Further information on the project can be seen in an earlier post here.

Following a period of consultation last year with leaseholders setting out the proposals and projected reductions in heating costs (see documents here – see the ‘Statement of Case’ document in particular to the proposed reduction in heat prices to tenants), the council has now completed negotiations with Veolia. A new Southwark report sets out some of the key requirements of the agreement. These include that:

The contract will expire in April 2033 at the same time as the boroughs waste PFI contract with Veolia. This project has clearly taken considerable time and effort by all concerned, but particularly Southwark officers, and they should be congratulated on seeing this project through. Getting heat output from the SELCHP plant after such a long time  (the plant is some 20 years old now)  is a considerable ‘win’ and should hopefully provide energy cost reductions to Southwark residents and broader environmental benefits in terms of carbon reduction.

£67.23m of DE projects to be delivered in London

22 April 2013: A useful update on some of London’s key decentralised energy (DE) projects being supported by the Mayor has been produced for the GLA Investment and Performance Board meeting taking place tomorrow (23 April). The Mayor’s Decentralised Energy Project Delivery Unit (DEPDU) is a three-year programme set up in August 2011 with €3.3m funding, 90% of which was secured from the European Investment Bank’s ELENA facility.

The paper (link to paper, direct here) sets out that the GLA has a contractual target with the EIB to deliver £67.23m of DE projects to market before the 3rd of August 2014.   The following projects as of 31st December 2012 have been taken to market through the GLA’s Decentralised Energy for London programme and, as agreed with the EIB as eligible projects. Together, they represent £42.3m, or 64% of the final ELENA target.

The paper states that when “fully developed and in operation, these projects will contribute with 4.7 MW of installed electrical capacity (and 35.7 MW of installed thermal capacity (enough to provide heat and power to 6,000 homes) to London’s generation from DE sources and will save up to an estimated 12,800 tonnes of CO2 per annum.

“In addition, the DEPDU is also currently supporting the development of an additional 22 projects with a combined value of £304m. Of these, five are in advanced stages of development, and are expected to be brought to market within the following 12 months.”

When fully developed and in operation, the paper states “these projects will contribute with 3.2 MW of installed electrical capacity and 90 MW of installed thermal capacity (enough to provide heat and power to 14,000 and 4,500 homes respectively) to London’s generation from DE sources and will save up to an estimated 20,200 tonnes of CO2 per annum.”
The paper goes on to say that the “paper does not include projections on jobs created. However, it is our intention to incorporate estimates of jobs created for future reporting and we will work with GLA Economics to establish a robust methodology.”
Further information on many of these projects can be found by searching on this website. 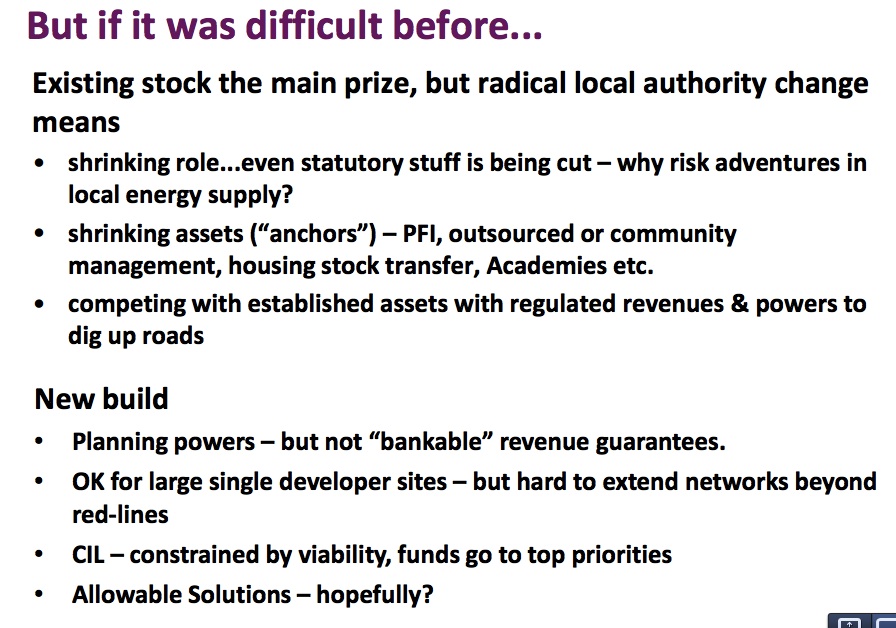 Lyn Brown: To ask the Secretary of State for Environment, Food and Rural Affairs what discussions he has had on the potential effects on human health in Newham of the operation of the South East London Combined Heat and Power incinerator.

Richard Benyon: The Secretary of State for Environment, Food and Rural Affairs, my right hon. Friend the Member for North Shropshire (Mr Paterson), has not held any discussions on the potential effects on human health in Newham of the South East London Combined Heat and Power incinerator.

January 2012: LetsRecycle news reports on progress made by Southwark Council to develop new district heating infrastructure taking heat from Veolia’s energy from waste plant, SELCHP, to provide low carbon, affordable heat to 3,000 homes across seven  estates in Southwark.  Southwark will not be required to make any up-front financial contribution to the project but would instead sign a long-term contract to buy the heat at a guaranteed lower price than can be secured from the conventional energy market. Further details are provided in the following Southwark news release and some earlier posts provide some further background.

December 2011: An article on the Guardian’s website includes some information a major new mixed development (shops, business space, 2,400 homes and a new ‘Sporting Village’ based around Millwall Football Club) planned for Lewisham – Surrey Canal – which is planned to form part of a district heating scheme using waste heat from the nearby SELCHP waste to energy plant.

A proposed heat network route from SELCHP is also being examined by neighbouring borough Southwark, to supply heat to a number of nearby estates (details previously posted here and here): the power station is currently wasting enough waste heat to supply both these routes and more development sites should they come along.

3 May 2011: Updates on Southwark’s work with SELCHP on taking waste heat from the power station to  nearby residential estates: 27 April update; 3 May update.