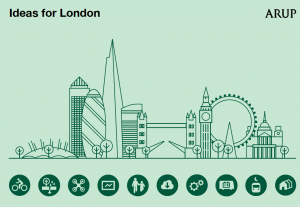 A further contribution of potential actions for an incoming Mayor – this time by Arup – in report just published ‘New Ideas in London‘. In the report Arup identify “five areas that the new Mayor should focus on during their first term in office.” Amongst these are a couple considering energy and climate issues – a summary of which follow below:

Other areas of interest include ‘A London Blue Grid’ and ‘Walking in a Green London’.