July 2013: DECC’s recent publication ‘Summary evidence on District Heating Networks in the UK’ highlights that extent that London dominates the regions in relation to the use of district heating. The report sets out that “London has over half the heat networks in the UK (55%) with two thirds (65%) being small”. Table 5 from the evidence paper (copied below) provides some additional detail: 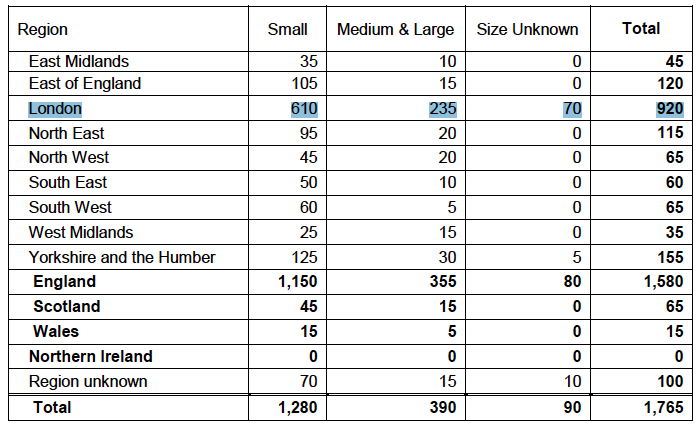 To take forward the Government’s 2012 Future of Heating Strategy, a series of actions were set out in a further report published earlier this year – The future of heating: meeting the challenge which includes a major chapter on heat networks. Not suprisingly, London is featured prominently with examples of recent activity on developing decentralised energy networks in Islington, the Upper Lea Valley, the Olympic Park and Stratford City, as well as the heat network installed in The Shard.

The report also highlights how work is being coordinated in London through the DEPDU initiative. Page 55 sets out “in September 2011 the GLA established the Decentralised Energy Project Delivery Unit (DEPDU) to support the London boroughs in bringing forward plans for decentralised energy. The unit, which is staffed by technical, financial and commercial specialists,has focused primarily on developing heat network projects.”

DECC are now seeking to replicate this model through the creation of HNDU.  The ‘meeting the challenge’ paper states that “DECC will support local authorities in developing heat networks by establishing a Heat Networks Delivery Unit (HNDU) within the Department that will work closely with individual authorities’ project teams in England and Wales. DECC will provide funding over two financial years to contribute to local authorities’ costs in carrying out early stage heat network development. This will enable local authorities to bring forward projects to the stage where they are suitable for investment including loan finance from the Green InvestmentBank or commercial lenders.” [p38]

£3m over two years will be committed to HNDU to provide specialist expertise and be a “bridge between the local authority and the market, acting as a ‘critical friend”. The unit will also have a “funding stream of £6m over two years [which] will be available to local authorities. It will contribute to the cost of procuring technical reports and advice on the phases of a heat network’s development.” [p57] The HNDU team held a workshop in  London last week where they set out their likely criteria for how they will judge applications to the fund – see the final slide (slide 12) of the following DECC presentation for full details on this. Attendees to the workshop were also informed that the HNDU team is being finalised at the moment, with an announcement expected shortly on the appointment of a lead Investment Director who will head the unit. Finance is anticipated to become available to local authorities for qualifying projects from this Autumn. Though the HNDU team has set itself a 7-year business plan – funding secured from DECC only lasts until 2015 at the moment.