Feed in Tariff Progress in London 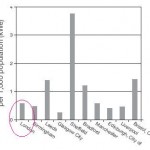 September 2011: The Guardian features a piece on AEA Technology’s useful Microgeneration Index which regularly provides details on the amount of Feed in Tariff (FIT) renewable energy technologies installed by region.  The Guardian report that “London has added more renewable power than anywhere else, with more than 3.2 megawatts of capacity added in the 15 months since feed-in tariffs became available. But when assessed per head, it comes only sixth in the UK.” The latest Microgeneration Index quarterly report (issue 4)  provides further detail stating: “During the following three months, growth in cities has continued (eg capacity in London has increased by 37% and in Glasgow by 131%). However, as some cities start from a low capacity, a better measure is the installed capacity in relation to the population…Sheffield stands out as the leading city, with Bristol, Leeds and Bradford following.”