March 2012: Energy regulator Ofgem have just issued their latest quarterly report on the progress of Feed in Tariff (FIT) installations across the UK, providing details up to the end of 2011. As reported in a previous post, the last few months of 2011 has seen tremendous activity in relation to photovoltaics, due to the reduction in the support tariff levels from Government. The newsletter highlights that as at 31 December 2011, a total of 147,112 renewable installations have been registered under the scheme since 1 April 2010 (when the scheme started) of which, more than 65,000 installations were registered within the last three months.

Continuing from previous quarters, Ofgem report that photovoltaic (PV) installations continue to represent the vast majority of newly registered installations at over 99 percent of all installations registered between 1 October and 31 December 2011.

Ofgem fortunately also provides a regional breakdown of installations, which highlights a disappointing level of activity in London.  In terms of the number of FIT installations, London appears to come at the bottom – just equal or below to the North East – with around 4,000 installations – significantly below all other regions (apart from the North East) – and only 1/6th as much as the best performing region.  This number of installations in London represents less than 3% of the total as at December 2011. 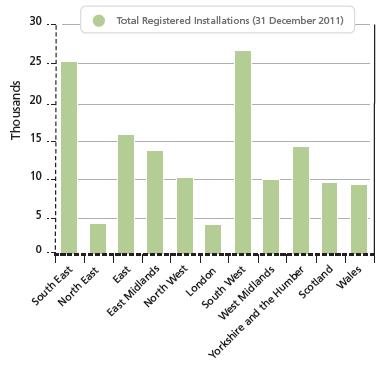 Of the total 661.07MW of of generation capacity registered under the FITs scheme since 1 April 2010, London has the second lowest level of installed capacity at 17.78MW – just 2.7% of the total (only the North East is lower – a region which does after all have lower levels of insolation).

No analysis has been undertaken as yet to why some regions have been more successful than others, or what have been the key factors to the uptake of  PVs. London certainly seems to have an active number of solar companies working within the capital and would have significant roof space, both domestic and non-domestic, that would be suitable for the installation of PVs. The high density of rented accommodation (as opposed to owner-occupiers) in London and typically higher costs associated with scaffolding may have been contributing factors. However, it is unlikely that they are the key determining factors in relation to identifying London’s poor performance.

3 March 2012: “Solar panels fitted to homes have been criticised for potentially harming property values and saving residents less than 1p a year on their electricity.” Read the full Islington Gazette story here.

January 2012: “Cllr Sean Birch said: “We had signed a contract to install solar panels in 1,000 street properties, and the fact that the government has changed the goal posts means this is not going to happen now. The council is going to be worse off because we were going to be generating revenues from the electricity at a time when money is scarce.” Read full Ham & High article here.

13 January 2012: Inside Housing article reporting that “Incentive payments for electricity generated from solar panels need to be set at nearly double the proposed rate for installations to remain viable for social landlords, according to research.
Figures produced by consultancy Camco for the National Housing Federation show feed-in tariff payments would need to be set at 32.4 pence per kilowatt hour to remain attractive to the sector.” Read the article here.

9 January 2012: Ofgem have just produced their latest quarterly detailed spreadsheet providing data on FIT installations across the UK. The spreadsheet now documents information on an impressive 147,114 entries of schemes installed across the UK since the beginning of the scheme!

Filtering the Ofgem spreadsheet to provide London-only data highlights that:

Additionally – the latest update on the number of photovoltaics (PVs) installed nationally (a regional breakdown not provided) is available via DECC’s weeks PV statistics (dated 5 January 2012). The 16 December deadline date set by Government – after which installations would face a major reduction in the subsidy support from the FIT mechanism – clearly had a dramatic effect as the graph from the statistics illustrates: 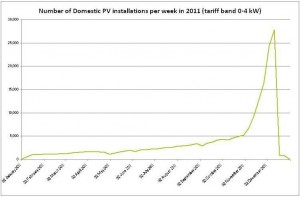 12 December 2011: A new Consumer Focus report1 – entitled ‘Keeping FiT’ – published today highlights the high overall level of satisfaction among consumers who have taken up the Feed-In Tariff (FiT) scheme. However it also shows some concerns about misleading sales practices, a lack of adequate information from some solar panel installers, and difficulties with the registration and payment process for the tariff itself. Read the full news release here.

November 2011: Waltham Forest had reported earlier this month that  ‘Solar panels will be fitted on council buildings and more than 1,000 council homes’ but it’s now been announced that the ‘solar plan has been scrapped’ as a result of the Government’s proposed changes to the Feed in Tariff (FIT) rates.

15 November 2011: Another potential London renewable casualty of the FIT cut: “Westminster Council’s housing provider CityWest Homes was days away from signing a deal worth £12 million to put solar panels up on 600 buildings by March 2012.” Read full story here in the Westminster Chronicle.

FIT reduction – A brief guide for councils and communities

November 2011: A short briefing note from Friends of the Earth (FOE) on the Government’s recent proposals to reduce the levels of tariff support to photovoltaics (PV).

26 September 2011: Ofgem’s latest Feed in Tariff Newsletter (issue 5) provides detail on renewable installations across the UK. London data shows that 4.4MW of renewable generation has been installed through the FIT programme in London, virtually of which (99%) is photovoltaic. As compared to other regions, London has the second lowest number of registered FIT installations (around 1,700) and second lowest amount of generation installed. The greatest number of FIT schemes installed are in the South East, South West and Scotland, where 6-7 times the amount of renewable capacity of that in London has gone ahead.

September 2011: From jojusolar.co.uk: “To celebrate our 5th birthday, Joju Solar will be giving away a free solar PV system and installation to a lucky community group. The entries will be judged by leading environmentalist Jonathan Porritt.
To enter the competition download the Community Giveaway Entry Form and return to Joju Solar before the deadline date. The deadline for entries will be Friday 7th October with the judges short listing entries there after before announcing the winner at the end of October.”

September 2011: Consumer Focus is calling for people to get in touch through a new survey to share their good and bad experiences of producing solar and wind power at their home as worrying reports of mis-selling have already been reported to the industry accreditation scheme. It is now a year since the Government introduced its feed-in tariff (FIT)  scheme and over 40,000 households have signed up to this scheme.

Consumer Focus state that “Many people have had good experiences of producing renewable energy at home but consumer feedback has already been very varied and some customers have reported problems. REAL Assurance, the accreditation scheme for the energy generations system industry, has expressed concerns about high levels of mis-selling in the industry. It has identified high pressure sales techniques as the principal cause of consumer complaints in the solar panel market.”

For consumers who are considering a free solar panel deal Consumer Focus has published a factsheet and key questions to ask.  A guide to consumers thinking about taking up solar panels is also available from REAL Assurance, called  How to avoid being taken for a ride It is also available in hard copy, email info@realassurance.org.uk or call 0207 981 0850.

So, if you have smallscale wind or solar power measures at your home and want to voice your opinion please get involved in Consumer Focus’s survey. It is open until 27 September and will take around 15 minutes to complete.