November 2013: This month the Mayor has been asked questions in relation to:

the price of Londoner’s gas bills; the uptake of the Green Deal in London; details of schools going through the RE:FIT Energy Efficiency Programme; the recent GLA-commissioned study looking at London’s Zero Carbon Energy Resource; London Energy Costs; the London Energy Efficiency Fund (LEEF) Loan to Croydon; work undertaken on Energy Efficiency guidance to SMEs; buildings adopting the GLA Sustainable Design and Construction Standards; whether the Mayor had sent a copy of the GLA’s  ‘Energy Planning: Monitoring the implementation of London Plan energy policies in 2012‘ research to CLG;  the Mayor’s response to a recent Environment Audit Committee recommendation that local authorities should have a statutory duty to produce low-carbon plans for their area; the GLA’s response to CLG’s Allowable Solutions consultation; Mayoral concern over CLG’s Housing Standards Review consultation; organisations working alongside the Mayor’s Affordable Warmth and Health Action Plan; events proposed around the Mayor’s Affordable Warmth and Health Action Plan; London’s children and fuel poverty; evaluation of the Know Your Rights Campaign; the Mayor’s support for nuclear; the Mayor’s response to former PM John Major’s comments on households having to choose between heating or eating; an update report on the Mayor’s Climate Change Mitigation and Energy Strategy; the Mayor’s response to concerns that the ECO is to be scrapped; the Mayor’s strategy for delivering the ECO and Green Deal in London; whether the Mayor has been in contact with CLG over the Housing Standards Review consultation.

October 2013: Solid Wall Insulation (SWI) is critical in helping improve the energy efficiency of a large proportion of London’s homes and hence helpful that the GLA’s RE:NEW team have produced a short FAQ document on planning issues around the retrofit of External Wall Insulation (EWI).

The note highlights that a General Permitted Development Order (GPDO) was “clarified in regard to external wall insulation for single houses in technical guidance published by the Department for Communities and Local Government, in January 2013. It is stated that for the purposes of planning, external wall insulation is considered to be an ‘improvement’ rather than ‘development’, and, hence, does not require an applicant to make a planning application first to the local planning authority.”

September 2013: Following the publication of the first quarterly set of detailed Green Deal and ECO (Energy Company Obligation) data back in July (details of which are outlined in the following post here) DECC has now published the much anticipated second quarter’s data set on 19 September 2013 (press release here).

END_OF_DOCUMENT_TOKEN_TO_BE_REPLACED

July 2013: Camden’s Environment Scrutiny Committee met recently where a detailed environment report for the borough was presented. The Green Action for Change annual review provides a pretty exhaustive account of the range of programmes being taken forward in the borough, including the following energy-related actions:

On the Green Deal and energy efficiency retrofits, the report outlines that: END_OF_DOCUMENT_TOKEN_TO_BE_REPLACED

July 2013: Claire Williams, MD of BG New Energy, provided a useful summary at BASELondon of key considerations by British Gas in complying with the delivery of the Energy Company Obligation (ECO) target, and its relevancy to London.

The shortfall in funding to London’s under previous energy efficiency schemes (the Government’s EEC and CERT programmes) was highlighted and Ms Williams set out that Londoners should get a ‘fair share’ of the estimated £85 per year that all households pay to fund the ECO. Other points raised included:

Importantly, Ms Williams went onto say that BG are committed to deploying a large proportion of their national ECO spend in London – at least 20% – with investment already going ahead with £16m targeted at 600 homes in Southwark over the next two years and discussions also going ahead with Lambeth.

The Mayor is currently working on establishing a Memorandum of Understanding with energy companies to help ensure that a larger proportion of energy efficiency funds come to London. Further information on the following post.

July 2013: DECC issued the first set of detailed quarterly Green Deal Statistics last week which provide include some limited regional results on the roll-out of the Government’s flagship energy efficiency programme. Hence, a picture of the activity in London to date is beginning to emerge. A number of information releases were published simultaneously on June 27  and are set out below, along with points to note for the capital:

So, early days as yet for both the Green Deal and the ECO. More detailed data would be helpful to determine the progress of the programmes in London and elsewhere. It will be interesting to see the Mayor’s response to the Green Deal after an assessment is completed for his own home.

Green Deal assessments by borough are provided below and have been re-ordered from that provided in the quarterly spreadsheet into a ‘league table’ order.

END_OF_DOCUMENT_TOKEN_TO_BE_REPLACED

July 2013: The Mayor has approved further interim funding for his domestic energy efficiency funding programme RE:NEW. The approval form MD1199 states that an allocation of £150,000 will be provided to a new interim Programme Delivery Unit (PDU) which is to be part of a programme to “stimulate a step change in the level of domestic retrofit activity in London” . Other actions include:

However, the approval document goes on to say “While the development of the ECO social housing pipeline has been successful, the resource will not be in place to deliver the projects through to the RE:NEW framework until the full business case has been finalised and funding sought. To avoid a slowdown in delivery during this period, we intend to procure interim support to help manage the early pipeline of projects that have been developed through our work with social housing landlords.”

June 2013: This month the Mayor has been asked questions in relation to:

A recent presentation by the GLA provides some further background to the new PDU.

Regional Green Deal statistics available …but not quite yet

14 March 2013: DECC published their first statistical release today on activity under the Green Deal over the months of January and February 2013 (statement by Secretary of State here). This revealed that 1,803 assessments of properties have taken place over the two months. The statistics however do not set out where these assessments were undertaken – ie no regional breakdown has been provided – which is hugely disappointing. Hence – the following twitter conversation took place. 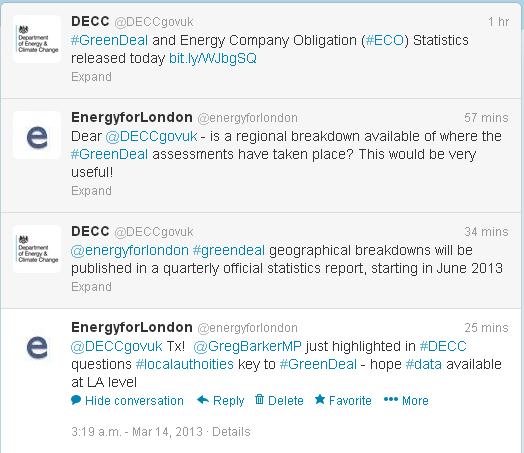 So – Green Deal (and ECO also …?) regional statistics (hopefully at the local authority rather simply the regional level) will be made available in the fuller dataset released in June of this year. DECC should also consider reporting on a regional basis in the monthly stats …a discussion that will likely continue. Interested parties do feel free to contact DECC to request this happens!

Update on the ECO brokerage

March 2013: DECC have provided a summaries on the first four auctions undertaken under the Energy Company Obligation (ECO) brokerage (for more on the brokerage – see here and here).  Details can be viewed on DECC’s website here . They’re not the easiest thing to decipher…hence, useful that Inside Housing have produced the following analysis highlighting that: