20 April 2012: Regular energy for london read, The Stage, has highlighted how the “National Theatre, the Royal Opera House and the Royal Albert Hall have clubbed together to form an energy-buying collective that will enable them to purchase electricity at lower rates. The scheme, called Arts Basket, is being run by energy consultancy Power Efficiency. The group is also inviting other theatres and arts venues to join the initiative.“ Read the full article here.  Further information on the Arts Basket – which is an initiative launched by Balfour Beatty company Power Efficiency – can be found here.

April 2012: From the East London Advertiser “Eight-out-of-10 pensioners in London’s deprived East End are paying too much for their gas and electricity, according to Tower Hamlets councillors. Now Labour members on the council are backing a national campaign for companies to put those over 75 on the cheapest tariff—by law.

“Cllr Rachael Saunders, Labour’s Adult Care spokesperson, said: “It’s no surprise that 80 per cent are paying over the odds with 400 tariffs on offer. “This rip-off must end—the big energy companies must make sure those over 75 are on the cheapest deal.” Nearly 8,000 in Tower Hamlets are paying £200 a year more than they need to, according to estimates. Labour is calling on the Government to legislate for energy companies to put the over-75s on the lowest tariff automatically.”

16 January 2012: “45% of people in London are worried they can’t afford their next fuel bill and one in two say energy bills will put a strain on their finances this year, according to new figures released today from Citizens Advice at the start of its Big Energy Week which will help people save money on their fuel bills.

Boris Johnson, the Mayor of London said: ‘We know that many people are deeply concerned about keeping warm this winter and Big Energy Week is a great way to find out how they can cut their fuel bills. In London we have been working with Citizen’s Advice Bureau and other organisations on my fourth ‘Know Your Rights Campaign’ to help thousands of vulnerable Londoners to keep their homes insulated and warm. In addition, 24,000 homes across the capital have had an energy makeover, through my RENEW partnership homes programme, increasing efficiency and helping to drive down fuel bills.

Big Energy Week (16-21 January 2012) will see advisers across the region help people spend less on heating and powering their home – including events in Westfield Shepherds Bush, Richmond and Harrow.  The Week is supported by Consumer Focus, Which?, Energy UK, energy companies, charities, accredited switching sites, Ofgem and the Government.”

September 2011: The latest official statistics on Winter Fuel Payments for 2010/11 have just been released by the Department for Work and Pensions (DWP).  The Winter Fuel Payment is “a tax free payment to help older people keep warm during winter” (further information here and here).  The data is provided in spreadsheet format on a Parliamentary constituency and local authority basis.

A quick analysis of the key statistics shows for London that:

15 September 2011: The Evening Standard reports on EDF Energy’s increase today in its  gas and electricity tariffs: “Hundreds of thousands of London families are facing energy bill increases after the last of the “big six” suppliers said prices will go up by
15.4 per cent in November.” To be totally accurate – standard residential electricity prices are to rise by 0n average of 4.5 per cent (EDF say this “is in line with inflation only and significantly less than rises by other major suppliers” and it is in fact residential gas prices which will rise by 15.4 per cent – again – EDF say “lower than all other major suppliers.”

The exact number of homes in London supplied by EDF Energy is not in the public domain, but as the successor company to London Electricity, the main energy supply business for London post privatisation (and despite a fully competitive energy market)  it remains the dominant player in the capital.

EDF states in its own press release that it “continues to be the cheapest dual fuel supplier nationally after limiting its price rises to the lowest level of all major suppliers.” A comparison of tariff rates compared with the other major energy companies is supplied on the press release.

The number of fuel poor households in London

August 2011: A number of announcements have been made recently in relation to the increasing numbers of households suffering from fuel poverty. A summary of this information follows below, along with its relevancy to London.

The Government’s latest fuel poverty estimates for the UK (based on 2009 data) were published last month (DECC press release) and set out the significant increase in the number of households now classed as fuel poor as a result of increasing fuel prices. The Annual report on fuel poverty statistics 2011 stated that “In 2009, the number of fuel poor households in the UK was estimated at around 5.5 million, a rise of around 1 million when compared to 2008, and representing approximately 21 per cent of all UK households.”

Regional analysis of the data in the Annual report (in section 5.9) highlights that the percentage of households in London (under the Government’s definition) that are classed as fuel poor  has risen from around 4%  in 2004 to around 13% as at 2009 : this equates to around 430,000 households, based on London’s 3.3 million homes.

In response to the Government’s news release fuel poverty charity National Energy Action (NEA) produced a briefing with an estimate for London’s fuel poor based on this 2009 data as 417,000.

This is of course all based on 2009 data as mentioned before. Projections data on a sub-regional basis is not provided in the DECC reports however, in terms of understanding the potential current numbers of Londoners who may be classed as fuel poor, the following should be noted:

August 2011: “French nuclear energy giant EDF has beaten off rivals here to win Britain’s biggest electricity supply contract, worth £6.8 billion, to supply the Government for the next four years. The deal, negotiated by the Cabinet Office in just three months, involves supplying all Whitehall departments with cheap electricity from April 2012. It also provides for supplying thousands of public buildings across England and Wales, including hospitals, police stations, defence sites, London Underground and the British Museum.” From thisismoney.co.uk – click on link to read full article.

In their press release EDF Energy highlight that “As well as electricity supply, EDF Energy will provide strategic and practical sustainability advice to help Government departments use energy more efficiently and reduce emissions.”

LU is one of the largest electricity users in the UK (annual consumption of around 1TWh of electricity).  London Assembly Member Mike Tuffrey recently wrote on using the purchasing power of the London Underground electricity contract to support the greater use of renewable energy.

4 July 2011: DECC have just published their latest data sets on UK energy prices(PDF report and tables also available in spreadsheet format), which includes a regional breakdown of gas and electricity prices for domestic and non-domestic consumers. London’s statistics reveal that: 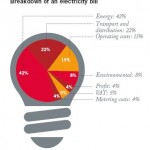 June 2011: Industry trade association, Energy UK, two-page factsheet providing a brief explanation of the elements that go up to make up electricity and gas unit prices.

IFS reports Cash by any other name? Evidence on labelling from the UK Winter Fuel Payment and Is there a “heat or eat” trade-off in the UK?

Is there a “heat or eat” trade-off in the UK?

8 June 2011: Institute for Fiscal Studies (IFS) research presents detailed household level expenditure data from older households merged with historical local weather information. The report looks to test “whether there is a  a heat or eat trade off: do households cut back on food spending to finance the additional cost of keeping warm during cold shocks? We find evidence that the poorest of older households are unable to smooth spending over the worst temperature shocks.”

7 June 2011: A new report from the Consumer Focus entitled ‘Missing the Mark – consumers, energy bill, annual statements and behaviour change’ (see bottom of page for link). This looks at the role of information on consumers’ bills and annual statements and the potential this has to help consumers. The research identifies a number of limitations in the effectiveness of this information in nudging behavioural change in consumers.